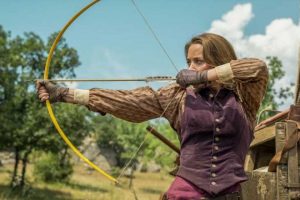 In the third episode of The English, Cornelia and Eli are still on their separate paths and stumble across realisations that threaten their trust in those around them.

Warning: this article contains spoilers for the third episode of BBC Two’s The English.

Given the brutal nature of the BBC western series thus far, it’s not surprising that episode three should begin with such startlingly savage imagery.

We open this episode back in Hoxem, at the homestead of the Flynn family. A woman runs towards the fence, screaming for her life. Her husband, Timothy Flynn, is behind her. He raises his gun and fires a shot, sending her now lifeless body tumbling over the barbed fence.

Then, he turns the gun on himself.

His neighbour, Billy Myers, is distraught when he nears news of the shooting, though perhaps not for the reason we might assume. When Billy goes to see the sheriff, he asks the perplexing question: were any marks discovered on the body?

This question, strange and elusive, sets the precedent for The English’s third episode, ‘Vultures On The Line’. Because here, our bodies and our land are one and the same, just as the marks we leave on them.

Amid this tragedy, Billy’s wife Martha discovers that their cattle has been taken. She rides to Thomas Trafford’s ranch, where she quickly finds them.

“That’s my cut!” she fires at one of the ranch hands, gesturing to the cows’ ears.

But she’s told that without a registered brand, the cattle are now property of the Stock Growers’ Association. Martha is furious. She has marked her property, but it’s not enough. And even after a fiery back and forth with Trafford himself, she is no closer to getting her cattle back. She rides away, and when Trafford asks the hand if he knowingly took the Myers’ property, he responds: “Anything with Billy Myers’ name on it is fair game in my book.”

It’s not enough for Martha to have made a physical claim on her animals. As long as Billy’s mark is there too, she is at a disadvantage. Whatever Billy has done, it seems that Martha will also have to wear the effects of his name.

The English episode 1 recap: how the BBC series plays on every woman’s fears (and darkest revenge fantasies) 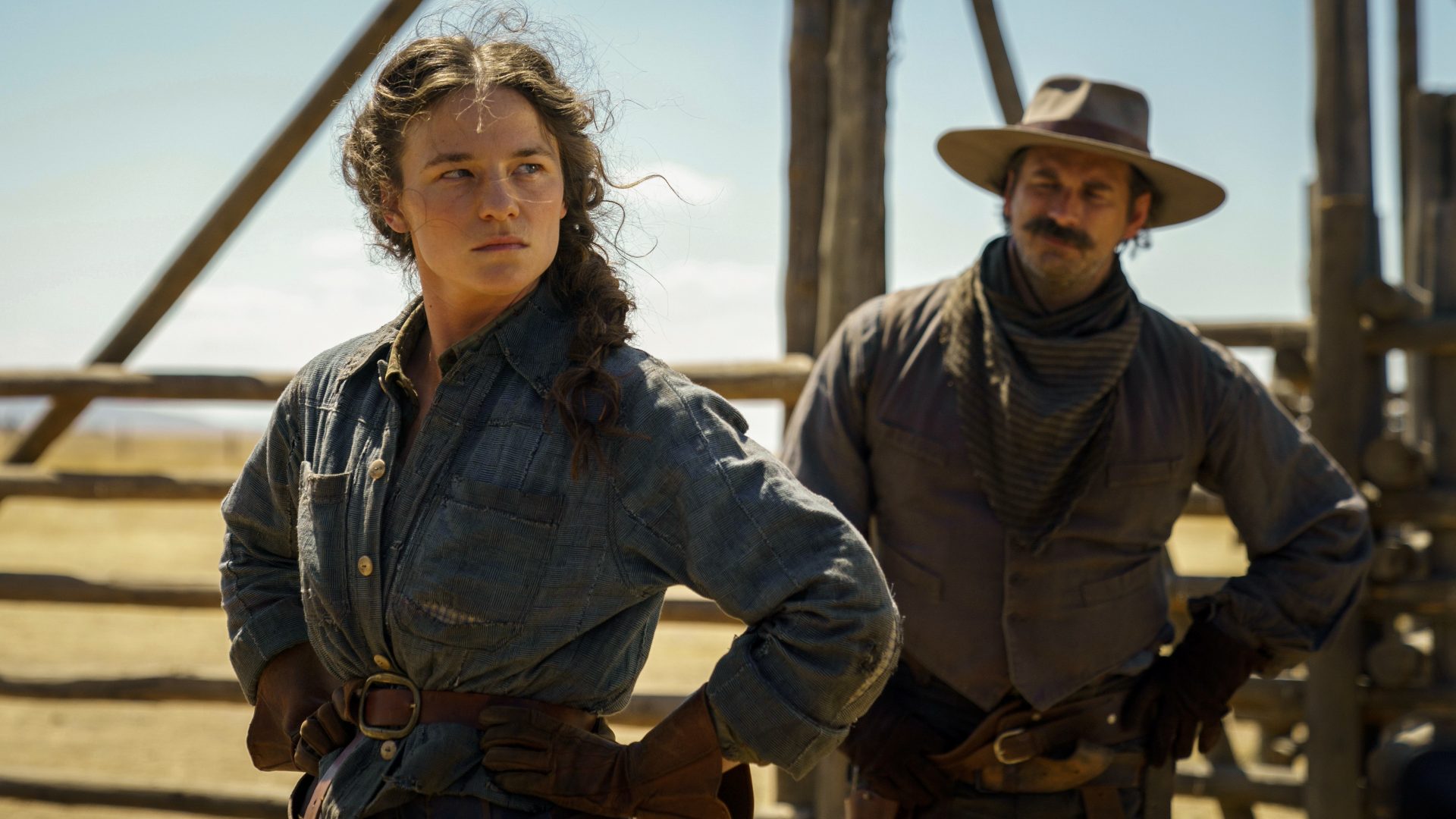 Martha goes to take back her cattle in episode 3

In the meantime, Sheriff Marshall discovers that Timothy Flynn’s wife had cowpox on her hands. When they go to excavate the bodies, they discover that one of them has the letter ‘B’ branded on their skin.

“I think we need a word with Billy Myers,” says the sheriff.

Although we aren’t told why Billy is such an important element in this story, we can clearly see his name across all things. Scarred and claimed, on both skin and reputation.

Later that night, Billy’s son finds him roped and hung. In the distance, an unknown rider escapes.

Meanwhile, Cornelia (Emily Blunt) is still on her quest to return the young rescued children to the Mennonites. She has comes across a scientist by the name of Jenson, who is showing her a sample of cells developed from a tick bite.

Jensen explains how ticks work – how the parasite invades the body and can wipe out an entire herd of cattle. He ponders how strange it is, how such a small thing can do so much damage.

Cornelia asks if he is looking for a way to treat it.

“Nature, red in tooth and claw,” he tells her, misquoting Tennyson for Darwin.

He tells her that this is the key to treating such a thing: by taking the parasite, killing it, and putting it back in the body, he hopes that this method could be applied to all aspects of life.

Cornelia is shaken when he includes the acculturation of Indians in this methodology, telling her:

“If you wanna survive in the white man’s world, you have to become one.”

When Jenson goes to leave, he is suddenly struck by a bullet, killed instantly. Cornelia plays dead as a Native American man comes down. However, he leaves her be, telling her that he only shot Jenson because he was wandering where he was not supposed to be.

It seems that this time, Jenson was the parasite. 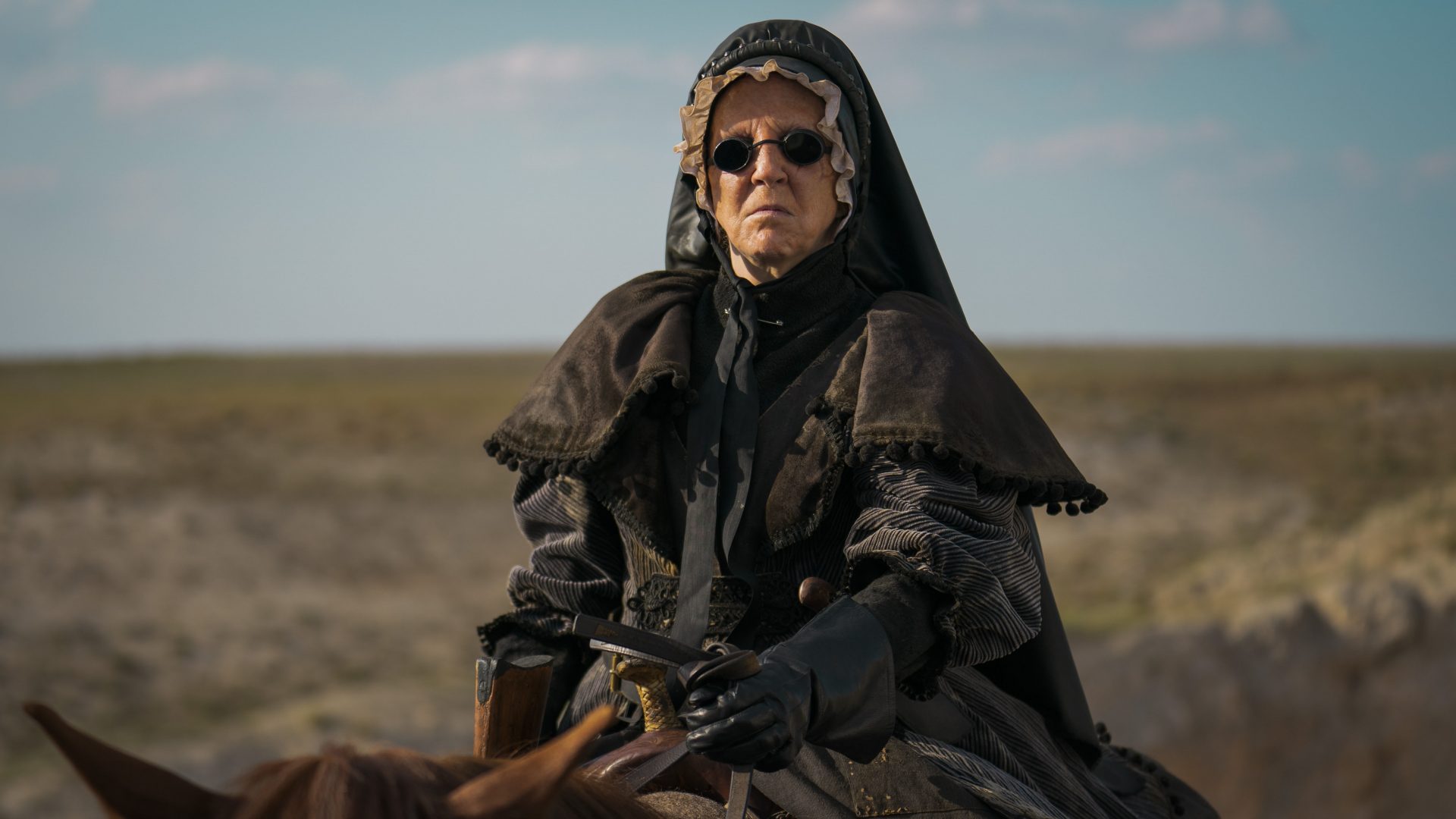 As Cornelia continues on, she is watched from afar by a family of bushwhackers led by the matriarch named Black Eyed Mog.

Back on the Clarkes’ farm, Eli (Chaske Spencer) is working for John to repay his debt. After some suspicious dealings taking place, Eli discovers that the Clarkes are actually Hucksters: people who assist and clean up after bushwhackers.

Cornelia, fearful that they are being pursued, stumbles across the Mennonites and reunites the children with their group. When they tell Cornelia where they are headed, she explains that the land they seek is already Eli’s, and that they were on their way to steal it back.

The Mennonites, confused, tell her that the land doesn’t belong to her, or them. It belongs to God.

Perhaps none of these characters have any right to the land across which they travel, killing and scrapping in the name of their various pursuits. Much like parasites, they are invaders on what could be peaceful terrain. Although Cornelia may not understand this, the Mennonites’ words appear to give her something to consider.

When she discovers the Clarkes’ scheming ways, she races back to the farm for Eli.

When Eli confronts John, John tells him that the reason for their wrongdoings is due to their lack of prosperity. Nothing grows on their farm.

“That’s why they gave it to you,” Eli quips.

John tells him, “This way, I get to give it back.”

“Kinda like a parasite though, ain’t it?” Eli asks. “Suck until you pop.”

“Says a man who got his coin from the US army.”

The word parasite seems to resonate differently to each man. Eli, who sees John as a cowardly schemer, thinks that he is absorbing his wealth and luck from the misfortune of others and is likely to meet his comeuppance. John, on the other hand, sees hypocrisy from a man who made his money off destruction and warfare.

But when it comes to the desecration of the West and those who inhabit it, is one worse than the other? Or are they both guilty of taking something from the world around them and spitting back out death and violence?

But then, John says something that muddles matters even further.

“The only people we strip down are white,” he tells Eli in defence.

Just as Jenson waxed false lyrical about integrating Native Americans into the “white man’s world”, John is using the same mentality to justify his greed. With both sides against each other and battling to wipe out the opposing “parasite” in different ways, it seems the ground will never settle.

It’s the possibility of consequence that hangs so heavily in the air. Much like Jenson spoke about killing the parasite and putting it back into the body, these characters are filling the world with their own anger and unwavering determination. They take for themselves and pay little bother to the fallen bodies behind them, unknowingly moulding the society in which they then have to survive.

When Eli tries to leave, he is shot in the neck with an arrow by John’s wife Katie. When Cornelia arrives shortly thereafter, Eli has already made his escape.

When Cornelia confronts Katie at gunpoint, Katie tries to talk her down, appealing to her sensibilities as a mother.

“You ain’t got the stomach for this,” she tells Cornelia, slowly removing her gun from her grip.

But Cornelia does have the stomach for this. Because when Katie attempts to hit her, Cornelia takes out her knife and stabs Katie in the gut.

The episode ends with Cornelia threatening John for information on Eli, who is in fact elsewhere, walking into the bootleg compound of a man who calls himself ‘Kills on Water’. A man who, apparently, has been looking for Eli for a very long time.

It’s a notable ending for a reason, for this is the first time that Cornelia hasn’t shed a tear over killing. Perhaps she has a bit too much of a stomach for this now.

As she will likely continue to rip through obstacles on her way to avenge her son, leaving behind devastation in her wake, she is becoming both at one with the land and working against it. Much like the tick, she is the small thing, causing so much damage.

One can’t help but wonder as she lets herself fall further into the depths of vengeance and allow herself to become trapped in the violent ways of the West, whether it will help or hinder her.

After all, as Jenson told her earlier in the episode:

“Biology may be our sole creator, but morality must remain our constant guide.”

The English airs on Thursdays at 9pm on BBC Two.