Everyone keeps making the same tired point about Harry & Meghan 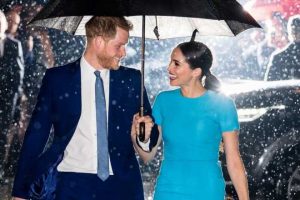 Harry & Meghan – the unprecedented six-part documentary series that explores the span of their relationship – dropped on Netflix today. And, as ever, it has been met with criticism by fans of the royal family.

Today’s the day: the first three episodes of the hotly anticipated Harry & Meghan series have dropped on Netflix. And, despite what some news outlets might have you believe, they aren’t dripping with salacious scandal after salacious scandal.

Instead, they offer a personal new spin on a love story that’s long been hijacked by the British tabloids. And, as such, they have made for… well, they made for pretty sweet viewing, to be honest.

“I’m already a Meghan fan, but I was still surprised at just how moving I found the first episode of the Netflix documentary series,” says Stylist’s deputy digital editor Ellen Scott.

“Here’s a couple talking about that fizzy excitement of the early stages of falling in love, bristling up against the fear of all the ways things can go wrong. You’d have to be colder than the December frost to not be at least a little endeared by stories of Harry awkwardly passing a chicken sandwich to Meghan, and fancying someone based on a photo of them with the Snapchat dog filter.”

Meghan Markle: Here’s a history of the sh*t she’s taken from the British press and public

Ellen adds: “It’s sweet – the nervous, sweaty, lovely bit of dating someone that you’re, as Harry puts it, ‘destined to be with’. How can anyone not watch this and root for the couple?”

Well, as it turns out, plenty can. Or, rather, plenty can pointedly declare that they’re never ever going to watch the documentary, thank you very much – but they are still content to share plenty of misinformed opinions about it. Obviously they are.

Watch the trailer for Harry & Meghan below:

The most resounding opinion of the ‘Won’t Watch Harry & Meghan, Will Never WatchHarry & Meghan’ brigade? The one that basically all of them have been shouting (via a string of usually misspelt capital letters) on one social media outlet or another, give or take a few exclamation marks?

Well, in the words of one such brigadier: “They said they wanted to get away from the spotlight, but everything they’re doing is the total opposite. First Oprah, then a book deal, and now a Netflix series. Way to go, looks like you are living that quiet life you so craved! All you’re doing is making money off the institution that you claim to hate.”

“Meghan Markle vs Kate Middleton: the dark subtext to the tabloid headlines”

Right. I can kind of see why people are so keen to die on this hill – kind of, if I try really, really, really hard. But here’s the thing everyone keeps forgetting, either on purpose or not: there is a phenomenally big difference between reclaiming your own story, telling it in your own words, and being hounded by the press at every turn.

Meghan and Harry have decided to tell their own story in their own words, and why the hell not?

To quote Prince Harry, the tabloids are overwhelmingly guilty of launching a “war against Meghan” – one only has to look over the comprehensive list of bullshit headlines that have been churned out about her over the years.

It was due to what they describe as a ceaseless “leaking and… planting of stories” that the Duke and Duchess of Sussex decided to step down from royal duties in the first place – and it is largely due to the media’s ongoing tidal wave of misinformation and negativity about the couple that has led to them making this documentary in the first place.

Why? Because they want to temper those awful rumours with their own truth. They want to share the real story behind the (often utterly) dehumanising headlines. And because they want to control the access that strangers – complete strangers they’ve never met, I hasten to add – have to the most intimate parts of their lives.

Kate Middleton and Meghan Markle: the long history of women being demonised for marrying into the royal family

Still struggling to comprehend this very basic concept? Well, I’d like to paint you a little picture, then. Humour me, please.

I want you to imagine that someone – an anonymous someone, so you can’t track them down and ask them why they’re doing this to you – keeps posting untrue claims about you, your friends and your family on social media. They leave comments underneath every Instagram photo, dissecting every tiny detail and analysing them to absolute death, solely to “prove” that your loved ones are uncomfortable in your company. That you are “smug” or “controlling” or “attention-seeking”. That you are, just generally, wrong in some way or another.

It’s not long before the imagination of the tabloids is captured by this endless stream of unsubstantiated claims and dubious sources, and everyone is reading about your so-called family feuds, your alleged disagreements with your colleagues, and your endless quest for fame and power. They’ve honed in on every “wardrobe mishap”, every glance, every gesture. They’ve had a number of “experts” explain why all of these miniscule moments prove, 100%, that you’re a bad person.

Worse than all of this? The majority of people believe every single bloody word – and you don’t have a platform to share your side of the story. To point out the many, many, many good things you’ve done; the charity work you’ve undertaken, the important issues you’ve highlighted, the wonderful relationships you’ve forged.

Instead, you just have to sit back and try to let it wash over you – and that’s in spite of the fact that other people you know (people who, perhaps, don’t sweat and are close friends with a number of controversial individuals) could and absolutely should be prime fodder for a tabloid takedown over you.

All things considered, I think Meghan and Harry more than deserve the time and the space to set the record straight. And they should be allowed to do so however many bloody times they want. So, instead of tearing them down for doing so, let’s celebrate the fact that these two individuals are finally getting the chance to speak up and out.

And if you really aren’t on board with it, then don’t worry: nobody’s forcing you to watch their documentary. Literally nobody. So get over it already, OK?

Harry & Meghan is available to stream on Netflix now.