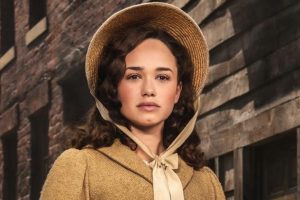 Following its cancellation in 2019, Jane Austen’s Sanditon is currently streaming on BritBox but now, is set to return to ITV for a season full of love, secrets and lies aplenty.

When the news initially broke that Sanditon would be returning for a second and a third season, it came as surprising but welcome news to fans. Let’s face it, many of us were disappointed when the ITV series was cancelled in 2019 after the first season.

Based on Jane Austen’s incomplete manuscript of the same name, Sanditon tells the tale of Charlotte Heywood (Rose Williams), an unconventional heroine who moves away from her countryside hometown to a seaside resort. The second season sees the return of heroine Charlotte, alongside a host of new faces who will surely make their mark on the sleepy seaside setting.

Now, Sanditon has already been streaming via BritBox but many period drama fans will be delighted to learn that the acclaimed series is returning to ITV later this month. That’s right, our Friday night drama slot is sorted for the foreseeable.

Due to the unfinished nature of the novel (Austen completed only 11 chapters), director and screenwriter Andrew Davies was forced to develop the characters and complete the story. And that story will continue in the new seasons…

The new series will pick up the action nine months after the season one finale, and it will feature characters familiar and new.

War & Peace star Ben Lloyd-Hughes will be one of the new faces joining the cast of Sanditon season two.

What will happen in Sanditon season 2?

Charlotte returns to the beautiful seaside resort of Sanditon and soon attracts the attention of two new men. And, in her last summer season before turning 21, Georgiana Lambe (Crystal Clarke), keen to forge her own identity, gets up to mischief in the name of love … but will she run the risk of being lonelier than ever before?

The Parkers are back, as Tom (Marshall) strives to rebuild Sanditon. But there are many unforeseen issues awaiting him, while the secrets and lies of the dysfunctional Denhams continue to rock the foundations of the sunny seaside town.

The army arrives to make Sanditon their new base and bring with them potential new romances, friendships and challenges for the residents.

Sanditon is returning for a second season with familiar and new characters.

Other intriguing newcomers include Captain Declan Fraser (Frank Blake, Normal People), a courageous character (if a little rough around the edges), and the striking and flamboyant Charles Lockhart (Alexander Vlahos, Versailles), a Byronic artist who arrives to paint portraits of Sanditon’s fashionable and wealthy residents.

When will Sanditon season 2 be released?

The new series is available to stream on BritBox but will premiere on ITV on Friday 22 July at 9pm. Mark your calendars, people.