Facebook To Test Out Ads Within Its Oculus VR Headsets 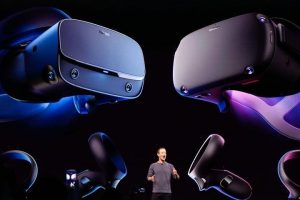 Facebook announced on Wednesday that it will begin testing out running advertisements within its Oculus virtual reality headsets.

Ads were first introduced in the Oculus mobile app last month, though the newest announcement illustrates that the company is gearing up to move beyond just app-based advertising.

Ads within the Oculus headset will first appear in the game Blaston from Resolution Games. Additionally, Facebook has announced plans for ads to begin appearing in two other Oculus apps over the coming weeks.

Currently, the company only shows ads through its social media platforms Facebook and Instagram. In 2017, Facebook reported that about 98 percent of its revenue comes from advertisements, so expanding its scope to include Oculus could be a lucrative move. In line with the company’s advertising policy, the expansion will give users the same ad controls they have on Facebook.