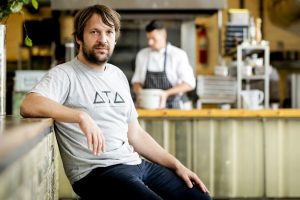 René Redzepi is the chef and owner of the acclaimed restaurant Noma in Copenhagen. His menus are heavy on local, seasonal, foraged ingredients, as well as the use of fermentation to make things like pine cones edible.

For a conversation with him based around an exchange of pieces of music, I chose the “Water Cadenza” from Tan Dun’s “Water Passion” as an amuse-bouche, followed by the first movement of “Cantus Arcticus” by Einojuhani Rautavaara. Redzepi chose Philip Glass’s “Floe,” from “Glassworks.” Here are edited excerpts from the discussion.

I wanted to pick pieces that speak to your sense of adventure when it comes to using ingredients that people haven’t considered edible before.

There is something so spontaneous and simple about the “Water Cadenza” that I truly enjoyed. I felt it was something we could actually listen to in the test kitchen. I came to work and had it on my headphones, and it was really upbeat — a positive, energetic song.

What made me think of you in these sounds of water being slapped and poured and decanted is also the quality of synesthesia, of engaging multiple senses. When I ate at Noma, the first course was a broth contained inside a pot of living herbs, with a hidden straw. In order to drink it, I had to bury my face in the living plant and there was the enveloping sense of smell and the leaves tickling my face.

It’s a way of shaking people and saying: Stop everything else, be here. This is the natural world right now as we see it; please take it in. Some come here and are already attuned to being curious. But other people? It’s the same with music. People eat and listen to the same seven or eight things all of their lives.

The second piece I picked for you is the beginning of the “Cantus Arcticus” by Rautavaara, a Finnish composer who died in 2016. It includes field recordings from a bog near the Arctic Circle so that the birdsong mixes with the orchestra. I thought there was an analogy to your cooking in the wild and the cultivated sounds, the foraged “found” sounds from the field and the composed ones.

First of all, I loved the piece. I thought it was incredibly dramatic, like I was waking up in a jungle somewhere.

Many things that I enjoy in art and design and crafts is when those two fuse: something raw and wild with something ultrarefined and very polished. When those two can meet I generally think that’s the future of our society. Becoming a little more wild and listening a little more to the wilderness so that we can be more attuned to it.

The other thing is that it’s very local. The birdsong ties it to a specific place and a specific season. And that made me want to ask you about seasons. Music is the art of change over time, and I think you are making an argument for returning food to that context.

It could also connect, as you said, to variety. We need to be better at using it. Eating variety. Listening to variety. And not having everything be the same all the time. It’s incredibly boring and it makes us lazy people.

My childhood was spent partly in Denmark and partly in Yugoslavia. When we decided that Denmark would be our permanent home, I was very rootless for many years. As soon as I entered cooking I found myself with something I loved. I fell in love with flavor immediately. But I was still not 100 percent sure if I actually belonged here. I didn’t have a sense of belonging anywhere.

When Noma opened in 2003 nobody foraged. I mean, they had done so out of desperation, but not for flavor or any exquisite texture. And we found ourselves on the shorelines and in the forest. And that’s when I found my sense of belonging, with my feet in some rotten seaweed or my hands deep in a bed of ramps. And I’d like to pass that along to anyone who is rootless: Go out and learn the seasons. See what’s edible. See what changes week by week. See how an ingredient is not that one thing you think it is. It can be five different ingredients as it grows form a little shoot to a berry.

I guess another part of that is fermentation, which is another way of making time work on ingredients. It has its own logic and span that you can’t hurry.

It’s an antidote to the world where everything is so fast; on-demand; lightning speed. To actually have things that you have to wait for and then something magic happens, I love that. The happiest people I know are people are in nature all the time: foragers, bakers, fermentation experts. Sometimes I envy that focus. My job is to be at the center of everything that is going on.

Speaking of a lot of things going on, let’s talk about the Philip Glass piece you picked, “Floe.”

The first time I heard it I thought maybe it was techno, and then I thought: No, it’s something completely different. I got pulled into the rhythm and the way it just keeps building and building. A lot of our staff listen to it. There’s something about the energy in that beehive of sounds that resonates with us when we’re just about to get very busy.

Listening, I was actually picturing a busy kitchen as well. It’s a demonstration of how much richness you can get out of changing just one variable, because the harmonic progression is the same over and over. So there are no surprises there. But there are constant surprises in how he changes the texture. He plays with these simple ingredients, but they’re quite weird put together: flutes, French horns, and synthesizers and saxophones. So you have airy, mellow and brash and — I don’t know what I would call a synthesizer. Sharp?

People get focused by listening to this song. If you play it loud enough, no matter what’s going on you’ll think: I need to focus. A lot of cooks have Glass on their playlist now. There’s something about his music that really works in the kitchen.

It doesn’t impose a story on you the way maybe the Rautavaara does. The Glass is very abstract. And to me, it’s fermentation: I picture things fizzing and bubbling.

Maybe we should play it in our fermentation room. Do you know Mort Garson’s “Plantasia”? It’s an electronic album that was meant for plants. And we play that in our greenhouse for our plants. I know there are quirky farmers who play music to their animals.

When you said “Plantasia” I thought it might be the amplified sounds of plants growing. John Cage wrote a piece for amplified cactus. And you can laugh or roll your eyes at that, but ultimately it comes down to the same thing you are doing — expanding people’s awareness of what’s audible and what’s edible.