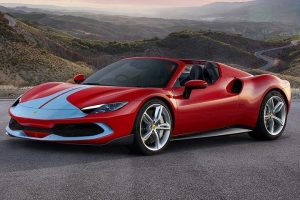 Ferrari‘s controversial — but admittedly much-needed in today’s world — hybrid V6-powered 296 GTB has officially been given a new sibling: the 296 GTS. Entering the hypercar market as the latest must-have drop-top model, the 296 GTS is largely the same as its hard-top brother, offering a three-liter twin-turbocharged V6 that’s mated to an electric motor powered by a 7.5-kilowatt-hour battery to produce 818 HP, 545 lb-ft of torque, and an electric-only range of roughly 15 miles.

The performance figures continue to amaze, as 60 MPH is hit in 2.9 seconds, 124 MPH is hit 7.6 seconds, and a top speed of 205 MPH will appear not too long after that. These stats are mighty impressive for a drop-top car, as no matter how hard a marque tries it will have to add weight via the means of extra strengthening and mechanisms — and here in the 296 GTS, it gains around 70kg on top of the 296 GTB.

Regardless, Ferrari insists that the driving dynamics remain as pure as can be for not just a fast Ferrari, but for a hybrid V6 hypercar. Dropping the roof in 14 seconds allows that unique V6 engine to purr behind the ears, and the exhaust resonator system has been reconfigured to better enhance the overall auditory experience as you shift through the gears in your Ferrari 296 GTS.

Torsional rigidity and bending stiffness are two areas of focus for Ferrari, ensuring the car remains planted on the road as opposed to feeling loose, which is a common mishap when taking the top off of cars. Undoubtedly, the Ferrari 296 GTS has only made the 296 GTB even better, à la McLaren’s 720S Spider.

Take a closer look at the Ferrari 296 GTS above, and find out more online.

In other news, MINI is returning to the race track.
Source: Read Full Article