Home » Entertainment » Filling Their Lives With Art, and Not Just One Piece at a Time

Filling Their Lives With Art, and Not Just One Piece at a Time

E. T. Williams Jr. and his wife, Lyn, began collecting art as newlyweds living in Baltimore in the mid-60s. “We had a couple of friends who were artists and we bought works from them,” said Ms. Williams, who studied art and briefly hoped to be a sculptor. Mr. Williams, then a retail bank manager, sometimes exhibited art at the branch he managed, while Ms. Williams volunteered at the Baltimore Museum of Art, haunting the collection donated decades earlier by Etta and Claribel Cone, well-traveled local sisters who amassed works by Matisse and other European artists.

“The Cone sisters were way ahead of their time,” Ms. Williams said. “What resonated with me was the way the sisters joined the personal circles” of the artists they championed. 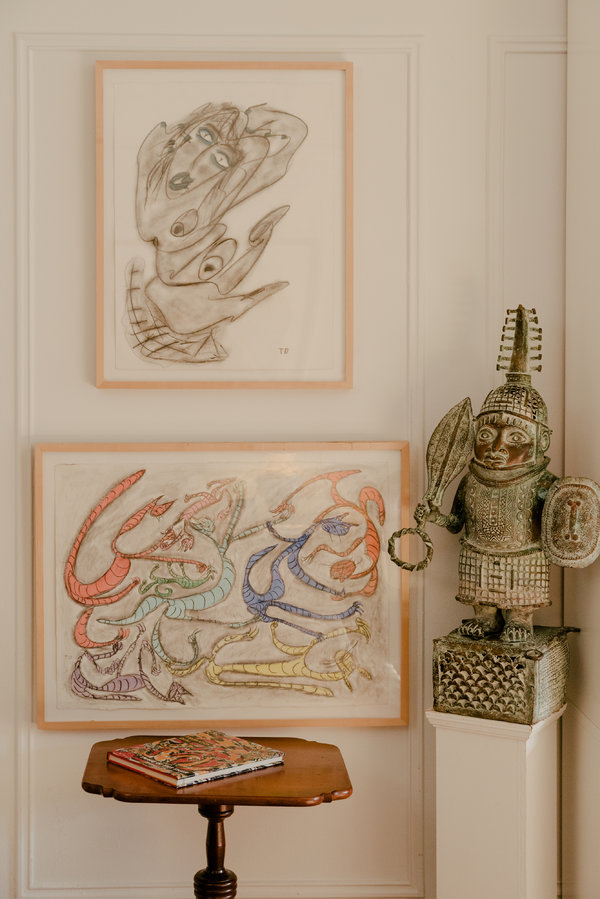 As their collection grew, the Williamses, too, took part in art circles. They began to invite students and fledgling collectors as well as established curators and museum directors for casual exhibitions at home, which continue today.

Mr. Williams said, “Later on, when we moved to New York, we began collecting limited edition prints” of works by African-American artists including Romare Bearden, Thornton Dial and Hale Woodruff. “These were the artists we heard so much about, the contemporaries of our parents,” he said.

“We moved from prints into original works” as he switched to real estate finance, which gave the couple “more cash on hand,” Mr. Williams said. Ms. Williams worked as a schoolteacher and administrator, opened a bed-and-breakfast in Sag Harbor, and handled some private interior-design clients.

In 1987, the Williamses bought the contents of Hale Woodruff’s studio from his widow, distributing the works to museums and hanging some on their own walls. In 2013 they acquired about 400 works by Claude Lawrence, an artist and jazz musician, and donated pieces to the Museum of Modern Art, the Brooklyn Museum, the Parrish Art Museum in Water Mill, N.Y., and others.

The Williamses continue to acquire paintings, collages and other works by black artists, filling their homes in Manhattan, Sag Harbor and Naples, Fla. They have made gifts of hundreds of works to major museums, part of a growing movement to ensure black artists greater visibility and stature.

They discussed their collection in a visit to their home in the East 70s. Edited excerpts from the conversation follow.

There’s art nearly everywhere in your home, on your walls and still in boxes.

I’m looking forward to the tour. Let’s start here in the dining room.

MR. WILLIAMS We’ll start with Thornton Dial, the most celebrated self-taught artist in recent memory. We have two paintings of his that are without doubt masterpieces. You’re looking at “In the Spirit of Us All.” The other’s “The Rising Ocean.”

LYN WILLIAMS I love the movement and the color. You sense Dial is trying for an inclusive feeling. “Spirit” is an uplifting and joyous piece. The movement seems to be going up, arms being raised. You’re drawn to it.

MR. WILLIAMS “Rising Ocean” is great, too. I love that piece. The sunlight reflects on it and you see the seashells on the ocean floor. In the black lines that go up, you can see the sea rising.

You have some remarkable Romare Beardens.

MS. WILLIAMS He’s always been a favorite. Come take a look at “Blue Silk Stocking.” Bearden uses light so very naturally, the way sunlight comes through a window and from the lantern on the table. It’s a feminine subject and has kind of a retro feeling, including the title.

MS. WILLIAMS We also enjoy showing the works to young collectors. Some of them come to us through the Schomburg [Center for Research in Black Culture]. We also give talks on collecting. It’s really important to demystify the whole process. Young people get nervous and overthink. It’s good for them to talk to people like us who’ve been through the steps.

What do you say to them?

MS. WILLIAMS Start with what you like. Educate yourself and train your eye. Hopefully we make it easier for somebody just starting out to continue the process.