First Image From HBO's 'The Last of Us' Adaptation Revealed 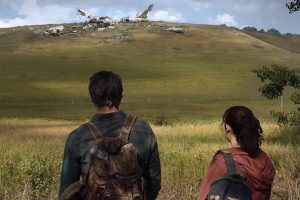 Naughty Dog co-president Neil Druckmann has dropped the first image of HBO’s “The Last of Us” TV series.

HBO and Naughty Dog are clearly playing their cards close to their chest, keeping the faces of both Pedro Pascal and Bella Ramsay obscured, but the image clearly sets out the journey aspect of Joel and Ellie’s story.

While Druckmann has previously mentioned that the rumored ten-episode first season will loosely follow the plot of the first game, the image sets an ominous tone with a crashed airplane visible in the distance.

The Games of Thrones alum were cast as Joel and Ellie earlier this year in an HBO adaptation of the award-winning video game franchise. Druckmann posted the image on Twitter, tweeting “When I first saw them on set in full costume, I was like: Hooooooly shit! It’s Joel & Ellie! ?!”

Druckmann’s still from the show could easily be mistaken for in-game footage with the weathered shirt and leather rucksack worn by Pascal a direct lift from Joel’s wardrobe in the first game, while Ellie’s faded red t-shirt has been replaced with a similarly colored hoodie.