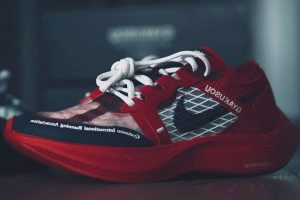 The collaboration comes at a time when we’re waiting for a number of UNDERCOVER x Nike pairs to release. For example, the threeway between UNDERCOVER, sacai, and Nike on the LDWaffle “Bright Citron” and the brand’s “UBA” Dunk are still doing the rounds on the ruminating Internet, and now we have another pair to impatiently wait for.

Taking the base form of the ZoomX Vaporfly NEXT% 2, UNDERCOVER adds a predominantly red lightweight upper alongside semi-transparent panels on the toe box, vamp, and sides. It also comes as part of the “GYAKSOU” collection — Nike and Takashi’s running-centric division — which makes sense given the sneaker’s origins.

“GYAKSOU” branding appears in block white letters on the lateral side on top of the black Swoosh emblem, as well as on the lateral front-quarter where it reads “Gyaksou International Running Association.” A red ZoomX sole unit, white laces, and Nike branding on the tongue rounds out the pair.

All we know so far is that the UNDERCOVER x Nike ZoomX Vaporfly NEXT% 2 is coming soon. Stay tuned to HYPEBEAST for more information as news unfolds.