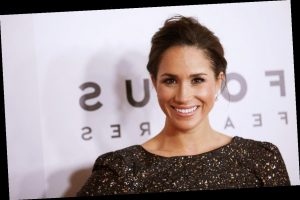 Trading one spotlight for another! Before Meghan Markle married Prince Harry in May 2018, she spent time at star-studded Hollywood functions, including the Golden Globes.

The Suits alum, 39, stepped out for the 70th annual event in 2013 and danced the night away at NB’s afterparty. She turned heads on the red carpet before enjoying the evening with her then-costars, including Patrick J. Adams and Gina Torres.

For seven seasons, Meghan portrayed driven paralegal Rachel Zane on the USA Network legal drama. She exited the show in late 2017, as her real-life romance with Harry, 36, grew more serious.

The pair announced their engagement in November 2017 and tied the knot in St George’s Chapel at Windsor Castle six months later. More major milestones followed, including the birth of their son, Archie, in May 2019.

Throughout their relationship, Harry and Meghan faced intense scrutiny as a high-ranking interracial couple in the British royal family. By January 2020, the pressure became so overwhelming that they announced their decision to step back from their senior royal duties.

“We have chosen to make a transition this year in starting to carve out a progressive new role within this institution,” the Sussexes wrote via Instagram at the time. “We intend to step back as ‘senior’ members of the Royal Family and work to become financially independent, while continuing to fully support Her Majesty The Queen. … We now plan to balance our time between the United Kingdom and North America, continuing to honour our duty to The Queen, the Commonwealth, and our patronages.”

Two months later, the family of three relocated to California after briefly staying in Canada. As they settled into their more independent lives, a source told Us Weekly exclusively that the Northwestern University grad was “really starting to feel like herself again” after the stress of royal responsibilities.

Their time stateside brought even more big changes. On February 14, Harry and Meghan announced that they’re expecting baby No. 2 after the Los Angeles native suffered a miscarriage six months prior. The pregnancy news came shortly before Buckingham Palace confirmed that the couple would no longer be working members of the royal family.

“While we are all saddened by their decision, the duke and duchess remain much-loved members of the family,” Queen Elizabeth II said in a statement on February 19.

The twosome issued a response to the palace’s announcement, adding, “As evidenced by their work over the past year, the Duke and Duchess of Sussex remain committed to their duty and service to the U.K. and around the world and have offered their continued support to the organizations they have represented regardless of official role. We can all live a life of service. Service is universal.”

Scroll down to see how Meghan rocked the red carpet at the 2013 Golden Globes!