"Floating Projections" of the YEEZY Gap Round Jacket Illuminate NYC, LA and Chicago 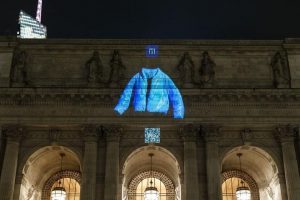 Following the inaugural release announcement for the 10-year YEEZY

Reaching new heights in an innovative marketing ploy, the soon-to-be-released silhouette has appeared glowing atop the exterior of popular landmarks, including New York’s Madison Square Garden and Guggenheim Museum as well as Los Angeles’ Dolby Theatre and Staples Center, and in prime viewing locations on each city’s high-volume streets.

The debut jacket, spotted on Kanye West last week, has no problem lighting up the respective cityscapes in its electric blue hue. The design, composed of recycled nylon, features an original connected collar-lapel construction and a puffer-like, front-copped shape, with no closure and a simple dual-branded logo on the interior.

Take a look at a full list of locations where the YEEZY Gap Round Jacket “Floating Projections” have appeared.

The YEEZY Gap Round Jacket is now available for pre-order on Gap’s website for $200 USD.

In another fashion collaboration, adidas Originals and NOAH have reunited on a sporty, summer range.
Source: Read Full Article