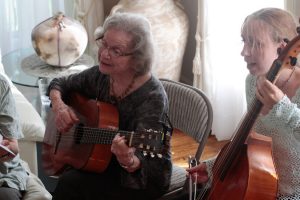 To Flory Jagoda, the language, rhythms and joys of the Sephardic Jewish music she sang and wrote connected her to her beloved nona — her grandmother — who lived in the small mountain village of Vlasenica in the former Yugoslavia.

“I think all the feeling that I have for the Sephardic culture, for stories, for song — it’s really a gift from her to me that I will have for the rest of my life,” Mrs. Jagoda said in an oral history interview for the United States Holocaust Memorial Museum in 1995.

They were songs of home and family, of love and Hanukkah, many of them in the diasporic language — Ladino, a form of Castilian Spanish mixed with Hebrew, Arabic and Turkish — spoken by the Sephardic Jews who were expelled from Spain by King Ferdinand and Queen Isabella in 1492. Some eventually settled in Vlasenica, where Mrs. Jagoda spent part of her childhood, among her beloved grandparents and extended family.

Mrs. Jagoda was a Bosnian. She spoke Ladino with her family in Vlasenica, but she conversed in Bosnian and Serbo-Croatian to outsiders.

“Our ancestors were Spanish Jews,” she said in the 2014 documentary “Flory’s Flame.” “You carry that love subconsciously. It’s in you. Everything that was Spanish to us was Jewish.”

A charismatic musician who played accordion and guitar and was known for the quavery trills of her singing voice, Mrs. Jagoda recorded five albums; performed in her homeland long after immigrating to the United States; and was named a National Heritage Fellow in 2002 by the National Endowment for the Arts.

Mrs. Jagoda died on Jan. 29 in a memory care facility in Alexandria, Va. She was 97.

Flory Papo was born on Dec. 21, 1923, in Sarajevo, when it was the capital of Yugoslavia, to Samuel and Rosa (Altarac) Papo. Her father was a musician.

When Flory was a baby, her parents divorced and she moved with her mother to Vlasenica, where they lived with her grandparents for several years and where she remained when her mother married Michael Kabilijo. Eventually, at about 10, Flory joined her mother and stepfather in Zagreb. She was close to her nona, Berta Altarac, and unhappy about the move to a big city.

But she adjusted. Her stepfather bought her an accordion and adopted her. But the Nazi invasion of Yugoslavia in 1941 forced the family to move.

Her stepfather bought train tickets to the Croatian city of Split, using gentile names for the family. Flory went first, charming other travelers on the trip by playing her accordion.

“I play it for four hours,” she said in “Flory’s Flame.” “They all came into the compartment. They love it. They love music over there. They sang, we had a party, the conductor came in and sat there and he started singing. Saved my life.”

She later wrote a song about the episode, which in English translation says in part:

After Flory and her family had spent several months in Split, the Italian Fascists controlling the city sent hundreds of Jewish refugees, including them, to Korcula, a Croatian island in the Adriatic Sea, where she taught accordion in exchange for food.

In 1943, with the Nazis approaching Korcula and other Adriatic islands, Flory and her parents fled on a fishing boat to Bari, an Italian port city on the Adriatic. She spent the rest of the war there.

While working as a typist for a U.S. Army salvage depot in Bari, she met Harry Jagoda, a master sergeant. They married in June 1945. She wore a gown made out of a parachute.

Mr. Jagoda returned to the United States before her; she arrived in April 1946, on a ship with 300 Italian war brides.

But she did not sing the Ladino songs her grandmother had taught her. Her mother, who had emigrated with her husband to the United States in 1948, was haunted by the wartime massacre of 42 family members, including her mother, Flory’s nona, and felt that the Ladino language had died when they did.

Her stepfather’s death in 1978, five years after her mother’s, let Mrs. Jagoda reset her musical course.

With her parents gone, she began writing down the songs she knew from her childhood; she also started to write new ones in the Sephardic tradition. One of them, “Ocho Kandelikas” (“Eight Candles”), a Hanukkah song, has been performed by the United States Army Band and covered by many artists, including Idina Menzel, the band Pink Martini and the Chopped Liver River Band.

Mrs. Jagoda sang at synagogues, folk festivals, community centers and universities, sometimes in various combinations with her daughters, Betty and Lori Jagoda Lowell; her son, Elliot; and two of her grandchildren. In 1985, the family gave concerts at several cities in the former Yugoslavia.

“In Novi Sad, we gave a concert in a synagogue with no windows and birds flying in,” Ms. Jagoda Murphy said in a phone interview.

Mrs. Jagoda taught her Sephardic oeuvre to Susan Gaeta, who became the older woman’s apprentice in 2003 through a program run by the Virginia Foundation for the Humanities. They performed as a duo and as the Flory Jagoda Trio, with Howard Bass.

“Flory embodied her culture,” Ms. Gaeta said by phone. “Singing Sephardic music and talking about her family was like oxygen to her.”

In 2003, Mrs. Jagoda sang at Auschwitz at the unveiling of a plaque to honor Sephardic Jews murdered by the Nazis. She sang a Ladino song, “Arvoles Yoran por Luvias” (“Trees Cry for Rain”), which Sephardic inmates had sung there.

The words, translated into English, include the lines “I turn and say, what will become of me,/I will die in a strange land.”

In addition to her daughters, Mrs. Jagoda is survived by a son, Andy; six grandchildren; and four great-grandchildren. Her husband and son Elliot both died in 2014.

“It was her mission,” she said during a concert in 2013 at the Smithsonian Institution, “to carry and to teach her young ones this language of her heritage — and never forget it.”