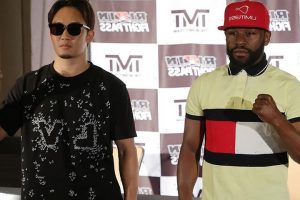 Floyd Mayweather will be making his way back to Japan for an exhibition boxing match in RIZIN. In a sudden press conference in Las Vegas, the undefeated 45-year-old boxer announced his next opponent would be the featherweight MMA star, Mikuru Asakura.

This exhibition fight comes after the viral fight that took place on New Year’s Eve 2018 where Mayweather faced off against current RIZIN Kickboxing featherweight world champion, Tenshin Nasukawa. Mayweather also emphasized that at this age, he’s not really competing to add another win next to his record, but rather, that it is out of pure enjoyment and the monetary payout, “He’s coming to beat me, but I’m having fun and I’ll still win.”

This fight is expected to take place sometime in September.