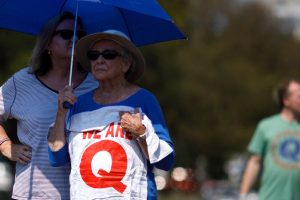 I first heard about QAnon in 2017, from a New York magazine piece by Paris Martineau. Back then, it was not the sprawling, well-developed conspiracy theory it is today.

It was a fringe message board movement known as “The Storm,” based on the cryptic 4Chan posts of a supposed anonymous government insider who falsely claimed that a vast network of satanic pedophiles, led by prominent Democrats and Hollywood celebrities, was running a global child sex trafficking ring. This anonymous 4Chan poster, known as “Q Clearance Patriot,” made the baseless claim that President Trump was secretly working to break up the ring and bring its perpetrators to justice.

My instinct, honestly, was to ignore it. As a tech columnist for The Times, I’d written about a lot of bizarre internet subcultures, and I knew that ridiculous 4Chan conspiracy theories were a dime a dozen. “The Storm” seemed to be just the latest iteration of Pizzagate, a bogus theory about child-trafficking Democrats that had taken hold on fringe sites during the 2016 election, and almost as quickly faded from view.

But QAnon didn’t go away. In June 2018, an armed QAnon believer was arrested after stopping traffic on a bridge near the Hoover Dam. A month later, QAnon supporters started showing up at rallies for the president wearing Q-branded hats and T-shirts. Unlike fringe internet movements that stay purely online, QAnon was seeping into the offline world, and I realized I was going to have to start keeping closer tabs on it.

I’ve often joked with other internet culture reporters about what I call the “normie tipping point.” In every emerging internet trend, there is a point at which “normies” — people who don’t spend all day online, and whose brains aren’t rotted by internet garbage — start calling, texting and emailing us to ask what’s going on. Why are kids eating Tide Pods? What is the Momo Challenge? Who is Logan Paul, and why did he film himself with a dead body?

The normie tipping point is a joke, but it speaks to one of the thorniest questions in modern journalism, specifically on this beat: When does the benefit of informing people about an emerging piece of misinformation outweigh the possible harms? It’s a hard balance to strike, and a judgment call every time. Give too much attention to a fringe conspiracy theory before it’s gone viral, and you might inadvertently end up amplifying it. Wait too long, and you allow it to spread to millions of people with no factual counterweight.

With QAnon, it became clear to me earlier this year that we’d reached the normie tipping point. I was lurking in QAnon Facebook groups and watched them swell to hundreds of thousands of members. I was hearing from readers whose parents, friends and siblings had disappeared into an online QAnon bubble. The movement’s followers were committing real acts of violence and vandalism, and spreading dangerous misinformation about Covid-19.

Since then, I’ve become something of a part-time QAnon reporter, and I’ve watched it grow from a fringe internet subculture into a sprawling movement that has been compared to a massively multiplayer online game and an internet-based religion. My colleagues and I have spoken to current and former QAnon believers, and interviewed family members and friends whose loved ones have been drawn in by the movement.

We’ve tracked the rise of QAnon-affiliated political candidates, including Marjorie Taylor Greene, a Georgia Republican who is currently on track to be elected to Congress in November. And we’ve tried to debunk QAnon’s most outrageous and dangerous claims — like the obviously false allegation that Hillary Clinton and other Democrats were literally killing and eating children in order to harvest a life-extending chemical from their blood. In the lead-up to the election, The Times has rolled out a feature called “Daily Distortions” aimed partly at debunking misinformation that has gone viral or caused harm offline.

QAnon is clearly a political story, and a story about how internet platforms have amplified dangerous misinformation and conspiracy theories. At the same time, I’m a former religion reporter, and I’m fascinated by the culture of QAnon. It’s not just a conspiracy theory — it’s a real-time, interactive media-making collaboration that gives people community, alleviates their sense of helplessness and unites them in a shared mission. I believe that mission is dangerous and detached from reality, but I also try to be empathetic and understand the forces that might be leading people to participate.

There are lots of other great reporters covering QAnon, both at The Times and other publications, and one particular challenge we face is that the movement is constantly evolving, expanding and narrowing its boundaries to pass itself off as more mainstream. QAnon followers are holding “Save the Children” rallies without mentioning their QAnon ties. QAnon activists are infiltrating communities of yoga moms and natural health fans and seeding ideas about a global cabal, while downplaying the more extreme parts of their belief system. And they’re getting good at laundering ideas into more mainstream conversations.

(A good example is the Trump administration’s recent focus on human trafficking, which, because it feeds into the QAnon movement’s belief about Mr. Trump breaking up a global pedophile cabal, has been eagerly embraced by its supporters.)

Covering QAnon — whose adherents falsely believe that the mainstream media, including The Times, is in on the global cabal — is not always fun. My colleagues and I have been harassed, threatened and taunted for doing this work. As I write this, my inbox is full of people calling me a pedophile, because I wrote about a group of yoga teachers who are trying to ward off QAnon’s influence in the wellness community.

But it’s important to track this stuff, because QAnon is not a self-contained, inward-pointing phenomenon. It’s a growing, shape-shifting community that is constantly incorporating new beliefs, attaching itself to new platforms and hijacking new narratives. Many of the most viral mistruths about Covid-19 and the Black Lives Matter protests, for example, have been pushed by QAnon groups — which is one reason I refer to QAnon as a “misinformation super-spreader.”

And it’s a good reminder that not every fringe movement stays on the fringes. Some of them, in fact, end up changing our culture.