Home » Entertainment » For AT&T, Balancing Change and Preservation Under the Same Broken Pediment

For AT&T, Balancing Change and Preservation Under the Same Broken Pediment

There was a plan, which provoked protests. The Landmarks Commission, with unusual readiness, swooped in. The new plan is better.

Tuesday night, in a Manhattan high school library, before a subcommittee of Community Board 5 and a small audience, the architects and developers of what used to be called the AT&T building — freshly minted as an official city landmark — presented their revised proposal to turn a historic, now vacant skyscraper into a Class A 21st-century office tower.

This time the idea no longer involves stripping away the base of the building’s pink granite facade, the proposal that incited the Landmarks Commission earlier in the year. This time, less is more. And credit to those who stood up for saving an architectural lightning rod.

A year ago, you may recall, the architecture firm Snohetta unveiled its initial plan to reincarnate the 37-story, 647-foot-high building with the Chippendale crown on Madison Avenue, between 55th and 56th Streets, which Philip Johnson completed in 1984 with his partner, John Burgee, for AT&T.

Conceived to convey permanence, the signature building opened in the midst of the telephone company’s breakup. Sony took the place over by the early 1990s. Lately, it had fallen vacant, a relic of an age when giant businesses commissioned whole skyscrapers for themselves. The development team, led by the Olayan Group, which acquired the site in 2016 for $1.4 billion, hired Snohetta to do the makeover. 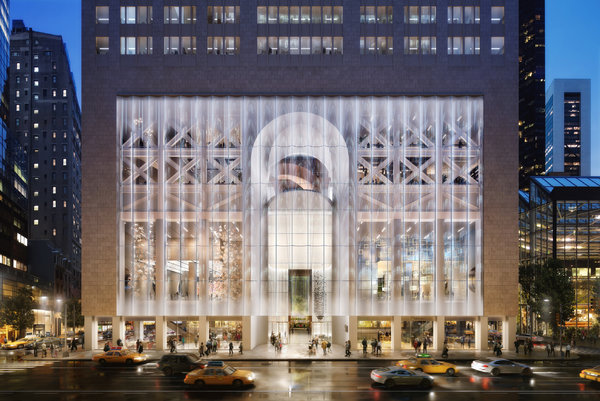 Snohetta’s big move in the first go around, visually speaking, was swapping out the lower portion of the building’s masonry facade for a diaphanous curtain wall. With its Apple store vibe, the fluted glass scrim exposed the building’s supporting steel structure and allowed light into a grand but gloomy second-floor sky lobby.

It was a gambit that brought to mind Snohetta’s popular expansion of the San Francisco Museum of Modern Art. Designed in the mid-1990s by Mario Botta, the museum’s masonry exterior always conveyed something of the air of a mausoleum, closing the building off from what was still a blighted part of the city. There, as well, Snohetta’s task was to update a divisive but potent project and civic symbol from the Postmodern era.

In the case of AT&T, even Johnson conceded, as long ago as 1994, that the building had problems. Talking about the public loggias and rear arcade, he acknowledged “the area at the base wasn’t used and became cold and unfriendly.” But Snohetta’s initial scheme undid the formal logic of how the mass of the granite facade is poised on its monumental base of big-footed columns.

The glass interrupted the tower’s pulled-taffy proportions, and spoiled what was even more distinctive than the broken pediment: the supersized Italianate portico, facing Madison Avenue, with its semicircular arches and big, quasi-ecclesiastical rose window. Years ago, Robert Venturi and Denise Scott Brown famously described functional structures dressed up with signs or ornaments as “decorated sheds.” AT&T was one of Johnson’s decorated sheds, its brawny granite skin wrapped around a basically conventional steel frame.

The architects’ proposal, to its credit, also eradicated the clumsy 1990s-era ground-floor renovations by Gwathmey Siegel, which had made everything worse. Those renovations enclosed Johnson and Burgee’s open-air loggias with retail spaces. They made the pedestrian plaza in the back even drearier. Snohetta imagined a tree-filled public garden going back there, stripping away the hulking four-story annex that long served as a de facto indoctrination center for Sony customers, adding a grassy berm and leafy nooks with plenty of seating.

But it was the change to the facade that roused picketers along Madison Avenue to tote “Hands Off My Johnson” signs and appeal to the Landmarks Commission. Protesters were doubly enraged after Olayan went ahead and demolished the lobby anyway, to add new elevators.

That was an underhanded move. Even so, the anger of the protests came as a surprise to some of those for whom the armoire-shaped tower had long been an object of, if not disdain, ambivalence.

As the critic Justin Davidson put it, Johnson’s design for AT&T “deliberately made it hard to distinguish between true grandeur and mock grandiloquence.” The building was at once a one-liner and one-of-a-kind. Detractors talked about the broken pediment on the city skyline as if it were the Stay Puft Marshmallow Man from “Ghostbusters,” another mid-80s confectionary menace.

But suddenly, young architects and preservationists, in particular, saw its defacement not as a strategy for resuscitating a dead building but as yet another assault on an increasingly vulnerable and admirable era in 20th century architecture. That revisionism extended to the work of Brutalists like Paul Rudolph, whose concrete behemoths, publicly reviled, had also come to be seen afresh by a generation of designers and design lovers.

I have always loved Rudolph’s works, despite their practical problems. I never loved the AT&T building, although it became part of the mental furniture of the skyline and then, incrementally, began to stand out by contrast with so many new glass towers. It had also become a fixture in classes about late 20th century architecture, a textbook example of Post-Modernism, parable of the star architect, catnip on Instagram.

And its chutzpah provided a timely antidote to the polite, public-spirited, retro-modernism that is now architecture’s default mode. Love it or hate it, 550 Madison was the opposite of polite.

So it was good news when officials designated the exterior of the tower a city landmark in July. Preservation shouldn’t be a popularity contest, after all. At the same time, buildings need to remain viable for the sake of their owners, occupants and neighborhood. The trick is balancing the two.

On Tuesday evening, Nick Anderson, project manager from Snohetta, presented the firm’s new strategy to the community board members. It leaves Madison Avenue’s facade along with the north and south sides of the building completely intact — in total, 94 percent of the exterior, Mr. Anderson said, won’t be touched.

What will go are Gwathmey Siegel’s ugly tinted bay windows, with their obtrusive, heavy mullions. They’re going to be replaced with clear glazing, discreetly recessed to give visual prominence to the building’s columns and the vertical voids between them.

In the back, seven new windows will be added to bring daylight into the sky lobby from the west. Another, tall, arched window will also be inserted between the new elevators in the lobby to open a vista straight from Madison Avenue through to the garden. There were grumblings on the community board about the lobby’s demolition and whether the transparency of the arched window betrayed the sepulchral spirit of the original building.

It does, but in the end the subcommittee endorsed the window and moved on to the proposed garden. With the elimination of the annex, and the return of the rear bays of the loggias to their original open-air configurations, the garden will become a new public park the size of the Museum of Modern Art’s sculpture garden, an indisputable upgrade. A slender, Y-shaped canopy will replace the half-barrel glass vault and mess of catwalks that now obscure the sky. Seasonal plantings will be conceived around a series of “outdoor rooms,” Mr. Anderson explained, whose “Platonic geometries” of circles and half-moons allude to the arches and round window on the facade and to other works by Johnson.

In 2002, The Times critic Herbert Muschamp reviewed the Westin Hotel on Eighth Avenue by Arquitectonica, the Miami-based firm, a blue and pink-orange glass building that many New Yorkers, quite rightly, found hideous. “The very embodiment of beauty’s evil twin,” Muschamp wrote.

“Not being too hung up on beauty is what makes life here possible, even thrilling,” was Muschamp’s response. He embraced the building’s outsider taste.

Johnson was the ultimate insider. That said, 550 Madison raises a similar point. The city’s beauty derives from its cacophony of tastes and cultures, its tolerance. We don’t have to find every building we preserve beautiful. But we do need an occasional building like 550 Madison to remind us of who we are.