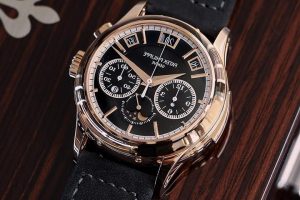 One lot at Phillips‘ upcoming Hong Kong Watch Auction XII stands out from the others, not just for its “Grand Complication” combination of complications, but the fact a former footballer is selling it off to help vulnerable people in his hometown of Naples.

Fabio Cannavaro was capped 136 times for Italy (forming part of the country’s World Cup-winning squad of 2006) and played for teams including Juventus and Real Madrid before a career in management, which now sees him in charge of Guangzhou in China.

The Patek Philippe Ref. 5208R is a modern reference, still appearing in the current collection, but it is thought this is the first time a pink gold example has appeared at auction. Phillips estimates that Patek only produces around 10 pieces of the model, which includes monopusher chronograph, minute repeater and perpetual calendar, each year.

Cannavaro founded Fondazione Cannavaro Ferrara in 2005 alongside his brother and fellow professional footballer, Paolo Cannavaro, former teammate Ciro Ferrara and his brother, Vincenzo Ferrara. The charity has so far raised three million Euros for “at-risk” youth and vulnerable families in Naples through sport and education programs.

In other watch news, Hamilton puts a watch on the wrist of the hero of Ubisoft’s forthcoming Far Cry 6 and you can wear it too.
Source: Read Full Article