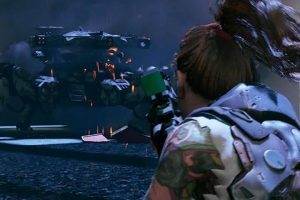 110 Industries and developer Soleil have just unveiled a brand new title over at Tokyo Game Show named Wanted: Dead, bringing together a collective of Ninja Gaiden and Dead or Alive veterans to create a fast-paced third-person shooter and slasher.

Created with next-gen consoles and PC in mind, the game will draw you into the life of  Lt. Hannah Stone, the leader of a special task force that operates outside normal police boundaries and rules called the Zombie Squad. As she ventures into a futuristic, sci-fi yet low-tech Hong Kong in order to investigate and crack cases, both ranged and melee weapons will be at your disposal, offering a wide gameplay experience regardless of whether you enjoy close-up combat, distanced engagements or a combination of both.

Other information about the game remain scarce for the time being, and the title itself only has a 2022 release window, so those interested should definitely stay tuned for more updates to come.