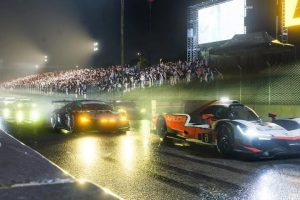 Turn 10 Studios has now confirmed that the upcoming Forza Motorsport will support full, real-time ray-tracing as well as a whole host of other features that’ll influence the way you race. Going into more detail about what players and racing fans can expect from the upcoming eighth installment, the video game developer revealed that on top of revamped visuals and full ray-tracing designed for the current-gen consoles, the game will also feature accurate day and night cycles to change up the environments you’re driving through.

To make things even more exciting, there’ll also be a whole host of adverse weather conditions that’ll change how your car reacts on the road in terms of grip and traction, which is now much more realistic thanks to the increase from just one contact point in Forza Motorsport 7 to now eight contact points on each tire in the upcoming title.

Driving mechanics aside, the livestream also gave fans a first look at some of the game modes available, including full race weekends with practice sessions and qualifying as well as a new career mode.

Unfortunately, there’s no release date just yet for Forza Motorsport, so racing fans should stay tuned for more updates to come.