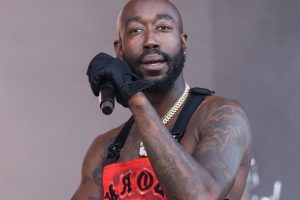 Freddie Gibbs stars as an animated version of himself in the official “Dark Hearted” music video. Directed by Aaron Hymes and Rouxx, the visual follows the cartoon Gibbs, joined by a bionic rabbit, on a nighttime chase through the city

As Gibbs races down the highway followed by his adversaries, his rabbit sidekick drops a grenade, blowing up the car behind him. Once in the clear, Gibbs pulls over to smoke a cigarette before continuing on with his mysterious mission.

“I know I took a risk with this s**t when I put my hands on it,” he raps in the second verse. “All my enemies watchin’, they plot and plan on me.”

The visual was creative directed by Ben “Lambo” Lambert, with executive production from Lambo and the rapper himself.