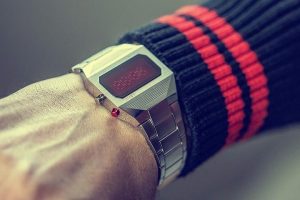 Two versions of the Yema LED KAVINSKY have been created by the musician; in both 316L stainless steel and black-coated stainless steel which will be launched on Kickstarter later this month.

The watch’s 35.5mm case presents a complex octagonal geometry with contrasting brushed and polished finishes around its central red LED display, which is activated by the push of the button at the three o’clock position. The second red button at the four o’clock gives access to the watch’s settings.

Kavinsky, whose music featured in the 2011 movie Drive, wears the watch in the video for his new track, “Renegade”.

Yema, which produced LED watches in the 1970s, launches the watch as a Kickstarter on March 18 with three available buy-ins starting at €195 (approximately $215 USD).