Home » 'Friday Night Lights' Cast: Where Are They Now?

'Friday Night Lights' Cast: Where Are They Now? 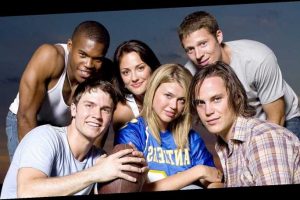 Texas forever! Friday Night Lights stole viewers’ hearts for five seasons on NBC — and the cast has just as much love for the series as their fans do.

The series was inspired by H.G. Bissinger’s nonfiction book, which was later adapted into the 2004 film of the same name. From 2006 to 2011, the show followed the journeys of high school athletes and their families in a rural Texas town, picking up a Peabody Award, a Television Critics Association Award and several Emmy Award nominations along the way.

Five years after the show went off the air, the cast reunited on the real-life Panther Field in Austin, Texas, at the 2016 ATX Television Festival.

“Being back here is amazing,” Scott Porter, who played revered athlete Jason Street, told Entertainment Weekly at the time. “We used to play flag football on this field and I think that, even more than shooting out here, means something to me in a special way and to be where those memories were made, where those friendships were really forged and ironed.”

Two years later, Porter opened up about the possibility of a revival of the sports drama — but emphasized that he thought the series gave each character the right amount of “closure” by the end. “There’s a lot of shows that end too early and the fanbase and those involved never get the closure that they really need,” he told Us Weekly. “I think a lot of us from Friday Night Lights all got the closure because it ended so well.”

Though fans have been holding out hope for a reboot, Adrianne Palicki, who played Tyra Collette, shut down all speculation in April 2020.

“I don’t know about you guys but I get this question every time I’m interviewed: Will there be a reunion episode or will there be a spinoff?” the actress asked her fellow costars, who reunited over Zoom for Global Citizen’s #TogetherAtHome special during the coronavirus pandemic. “The answer is no.”

Scroll down to learn more about where the cast of Friday Night Lights is today.