From Collecting Firewood for Sale to Forging a Path in College

DECATUR, Ga. — For a brief moment, as she looked out of the arched, third-floor windows of Agnes Scott College’s library, a look of longing crossed Nuam San’s face.

She was describing the deep green of the hillsides in northwestern Myanmar, where she grew up in a mountain village of about 100 people. The color, she said, is “full of life” and remains her favorite.

But almost as quickly, the soft-spoken Ms. Nuam San recalled how hard life was in her village, Tedim.

Her father left to find work in Malaysia when she was a toddler; her mother cared for five children. That meant gathering firewood to sell, a job that Ms. Nuam San would help with after school. When it rained, their tiny house got wet inside. 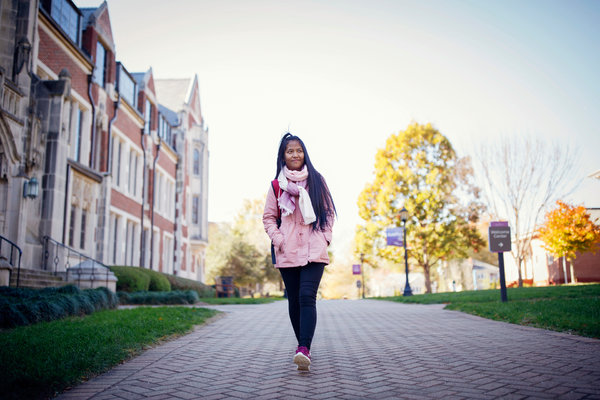 Ms. Nuam San, 20, recalled last month how much her life had changed since she moved to the United States five years ago. At the time, she spoke no English and came from a country where women are expected to stay at home. Now she is a freshman at a small, private women’s liberal arts college outside Atlanta. The college, founded in 1889, appealed to her, she said, because it “would help me become more powerful as a woman, a lot more than just being a houseworker.”

Along the way, she and her family received help from the International Rescue Committee, one of the eight organizations supported by The New York Times Neediest Cases Fund.

Ms. Nuam San’s family, which was Christian in a country that is largely Buddhist, resettled in Clarkston, a city northeast of Atlanta. Her father arrived first, seeking asylum after about 10 years in Malaysia.

As a child, Ms. Nuam San heard stories about soldiers coming to burn a cross in her village, which had a large number of Christians. She also heard that “honey and milk were free” in the United States.

Her father arranged for the family to travel to Yangon, more than 600 miles south of their home, which might as well have been a different world, Ms. Nuam San said. In the city of more than five million, most residents speak Burmese, which was a second language to Ms. Nuam San, who grew up speaking Zomi.

A year later, the family was able to join her father in Clarkston. The city and surrounding area have drawn at least 26,500 refugees from 67 countries during the last 40 years, said J. D. McCrary, executive director of the International Rescue Committee’s Atlanta office.

Ms. Nuam San soon found that milk and honey were not free. Plus, “they took me everywhere in cars, and I got carsick,” she said. She had to start school within a month of arriving, in an English as a Second Language program (it was actually her third). She didn’t even understand when people asked her name or where she was from.

Ms. Nuam San often wanted to give up on school, go to work and help out at home. But Ms. Khatiwada, she said, “told me I couldn’t give up.”

In the summer, the organization took groups of young refugees on field trips, where Ms. Nuam San started to create a deeper sense of community. She was able to leave the English as a Second Language program in her sophomore year of high school, after three years in the United States, and began taking Advanced Placement courses. She graduated with a 3.8 grade point average.

When it came time to apply to college, including writing an essay, “at first, I didn’t know if I had a story,” she said. “I didn’t know what to write. Miss Sharita sat me down and helped me to realize I had a story to tell.”

Annual college tuition for Ms. Nuam San, who is now a legal permanent resident in the United States, is more than her family earns in a year. She has been helped by a series of scholarships and loans and feels she must succeed to “be the leader for my whole family.”

As for the future, she dreams of a having an important job, perhaps in the White House.

“I feel like I could help a lot of people have a better life, a better education,” she said, “and not lose hope in themselves.”