Home » Entertainment » From ‘The Simpsons’ to ‘The Twilight Zone.’ And Now, Trump.

From ‘The Simpsons’ to ‘The Twilight Zone.’ And Now, Trump.

LONDON — When Anne Washburn started her Trump play, she didn’t think it would ever see the light. After a frustrating day spent reading the news online, she would begin to write. “It was enjoyable to feel I had some measure of control over the situation,” Ms. Washburn said. “It’s the helplessness that makes people crazy.”

The result was “Shipwreck,” subtitled “A History Play about 2017.” It begins performances Feb. 11 at the Almeida Theater here before a likely, but as yet unannounced, run in the United States.

“Shipwreck” is set in the immediate aftermath of the former F.B.I. director James B. Comey’s congressional testimony, when a group of white liberal friends gather in an old farmhouse in upstate New York; as snow falls and supplies run short, their conversations endlessly circle and jab at the Trump administration, and eventually each other.

But the house is also haunted, theatrically, by the people who lived there before — a farmer, his adopted black son — lending a long-view perspective that acts as a counterpoint to the chatter of the New Yorkers. Oh, and Donald J. Trump himself even puts in an appearance.

“He kind of appears. He appears in a way. It would be so lonely without him,” Ms. Washburn said with a degree of mischief when we met at the Almeida. She was keen not to reveal too much.

Ms. Washburn was in town for rehearsals with Rupert Goold, the show’s director who also runs the Almeida. It’s a busy time for the American playwright in London: Her adaptation of “The Twilight Zone,” seen at the Almeida last year, is about to transfer to the West End beginning March 4.

Critical reactions to her work here have always been rather mixed: “Twilight Zone” was met with varying degrees of warmth, while Robert Icke’s 2014 Almeida production of “Mr. Burns, a Post-Electric Play,” Ms. Washburn’s breakout, produced one of the sharpest divides among critics in the last decade. 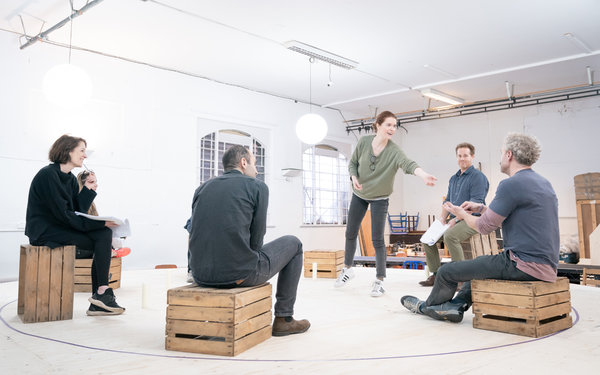 Still, this post-apocalyptic comedy — in which the Cape Feare episode of “The Simpsons” transforms over generations into the nurturing stuff of myth — won ardent fans among young audiences, playwrights and bloggers.

“Almost all the critics hated [“Mr. Burns”], which in the States would have destroyed it, in a way that it didn’t seem to here,” Ms. Washburn observed. (The play’s American supporters include critics for The New York Times, who named it one of the best 25 American plays of the last 25 years.) “Here people were quite invested in hating it, or championing it — it kept going in a way, which is ideal from a playwright’s point of view. In the States, people wouldn’t even have bothered to hate it.”

That ferment — and the Almeida’s continued belief in her writing — has made Ms. Washburn a significant figure on the British theatrical landscape. Add to that the box office appeal of a title like “The Twilight Zone” and Ms. Washburn can sail into the West End; by contrast, she hasn’t had work on Broadway.

Still, she never expected “Shipwreck” to open here. “It’s a very American play,” Ms. Washburn conceded, and she’s had to tweak the script a little for British audiences. But she’s found it resonates in a country going through its own political upheaval.

“It’s not like it’s a covert Brexit play, obviously, but it touches on things,” she said. A few lines about inaction in the face of looming disaster, although written about the United States, were added in London following Ms. Washburn’s “endless discussions with agonized British people.”

She began “Shipwreck” on a silent writing retreat in June 2017. “I wanted to see what it would be like to write about the current time, because that was all I was thinking or talking about,” she said. And it was important to her to try to understand Trump supporters, too. “Writing the play came from having a very liberal experience but it also came from going online and seeking other viewpoints, visiting websites that I don’t normally hang out at.”

Whether art can, or should, tackle contemporary politics is among the issues chewed over by the “Shipwreck” characters. Their discussion of the controversial depiction of President Trump in the 2017 Shakespeare in the Park production of “Julius Caesar” is a proxy for Ms. Washburn’s own wrestling with the dilemma.

“Whether art has a responsibility to be contemporaneous, whether it can be contemporaneous, is a huge question,” Ms. Washburn said. “I feel like the idea of an immediate political theater is very enticing and yet often disappointing. It’s a hard nut to crack and yet we still want to go at it.”

By the time “Shipwreck” was finished last April, she said, it was too late for 2019 programming in the United States. British theaters, however, are a little more nimble. And although she had only showed the script to a few friends, Mr. Goold had got wind, and asked if he could read it.

His first reaction was simply how funny the play was. “She doesn’t write a dull line,” Mr. Goold said over the phone. And although he was surprised at its overtly political nature — not typical of Ms. Washburn’s writing — addressing how theater can respond to politics was certainly appealing.

Mr. Goold had some concern it would be too American. “But the inability for metropolitans to come to terms with the shamanistic power of populism is as relevant here as it is over there,” he added.

Ms. Washburn was surprised at his interest, but then, she initially didn’t think anyone would want her Trump play. “I thought no one would ever want to spend any more time talking about it than we already do,” she said. “But I did want to get into the intricate, really overheated language we were all partaking in. What is it like to put this time on paper?”

Inevitably, then, “Shipwreck” is a talky, thinky piece, but Ms. Washburn’s skewering of the chattering classes is as sparkling as it is spiky. (Tara Fitzgerald, Selyse Baratheon on “Game of Thrones,” is best-known in the cast of British theater regulars.) She’s always shown forensic interest in the way we speak and the stories we tell, from making up her own language for 2006’s “The Internationalist” to tracing the mutation of culture in “Mr. Burns.”

There’s also a through-line with “The Twilight Zone.” The British theater and opera director Richard Jones had brought her onto that project, having been impressed by the “audacity” of “Mr. Burns.” He described Ms. Washburn as “a brainiac” — but a hilarious one, who is “very joyful to work with.”

Ms. Washburn was working on it during the 2016 presidential campaign, and found herself wondering: “What is America doing? Where did this thing come from?”

“The Twilight Zone,” she added, “felt like the subconscious of America laid bare.”

She has now done the same thing in “Shipwreck,” once again reflecting America back at itself — even if it is London audiences who will get the first look.