From Twilight to High School Musical, This TikToker's Parody Videos Are Freaking Hilarious 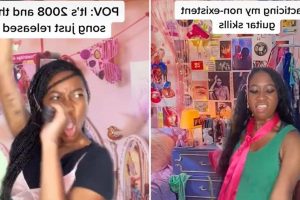 Those hallways were so. Cold. ib: a grapejuiceboys post #summervibes #2009 #maroon5 #viral #poolparty

POV: It’s 2009 and You’re at a Birthday Pool Party at the Radisson Hotel

To anyone who’s ever tried to re-create a Disney Channel music video in their bedroom or felt like the odd one out at a friend’s birthday party as a kid, you’re definitely not alone. In what has quickly become a virtual scrapbook of many people’s childhoods, Yasmine Sahid’s TikTok account is packed with parody videos poking fun at movies, characters, songs, and even whole moods from the 2000s.

Sahid, who is largely responsible for the success of the “main character” meme parodying movie cliches, grew up loving shows and movies like High School Musical, That’s So Raven, The Suite Life of Zack & Cody, and The Proud Family. Today, she entertains hundreds of thousands of followers on TikTok by capturing the nostalgic feeling of what it was like when Miley Cyrus first released “7 Things” or when the Cullen family first revealed their unnaturally luminescent eyes to us in the Twilight movies. (She even re-creates One Direction fan-fiction — now that’s commitment.)

“I love how nostalgia brings so many people together,” Sahid told POPSUGAR via email. “The things we enjoyed in our childhoods were so simple and [cringeworthy] but they gave us the best memories. I like to poke fun at the time because we made so many choices that made me think, ‘Why did we enjoy this?’ But that’s part of the fun of childhood! That’s So Raven actually inspired me to become a comedic actress and I still binge-watch the show!”

Some of her personal favorite videos to create have been “every main character standing up to the bully” and “every main character breaking up with her boyfriend.” “Those scenarios are in literally EVERY teen movie so the writing process wasn’t too hard,” she said. “I remember getting so into the scene when I was recording it because I’ve always low key wanted to be in those movies! The more passionate I got, the cornier the result, and they turned out great!”

As a comedian and aspiring actor, Sahid says her dream would be to work with Anne Hathaway and Raven-Symoné, and have *NSYNC make a cameo on the project. In the meantime, she’s working on a song and music video about the “main character” under her stage name Lady Yasmina, something she believes her younger self would be extremely proud to hear. “I think she would be really excited that I’m living her dream and actually doing the work rather then sitting in front of the TV and journaling about it,” she said. “It makes my day to know that my videos were able to brighten someone else’s.”

Check out some of Sahid’s best TikTok videos here to relive some of the most awkward (and hilarious) moments of your childhood.