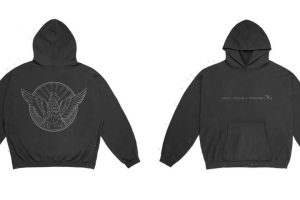 Future has tapped Ye, formerly known as Kanye West, for a merch collection in support of his newly-released ninth studio album I Never Liked You.

The collaborative range, which was designed by Ye’s creative collective DONDA, includes hoodies donning the album’s name in a subtle font and long-sleeve T-shirts boasting imagery of the chart-topping rapper alongside type treatments inspired by the record. Additionally, the collection serves up hats, socks and a face mask similar to the one Ye wears in the “KEEP IT BURNIN” video off the album.

I Never Liked You, which was released last week, features 16 tracks and guest appearances from artists including Gunna and Young Thug on “For a Nut,” Drake on “I’m On One” and “Wait For U,” EST Gee on “Chickens” and Kodak Black on “Voodoo.” The rapper on Monday dropped a deluxe version of the record, which includes six additional tracks and features from Lil Baby, Lil Durk, 42 Dugg and Babyface Ray.

Future’s I Never Liked You merch collection is now available to shop on the artist’s website until Thursday, May 5, at midnight. Prices range from $22 USD to $142 USD.

Take a look at the full range above.