Home » Entertainment » ‘Game of Thrones’ and ‘Avengers’: 2 Times Critics on the Power and Pain of Endings

‘Game of Thrones’ and ‘Avengers’: 2 Times Critics on the Power and Pain of Endings

It’s been a blockbuster-filled few weeks. Aside from, perhaps, the song “Old Town Road,” the two biggest stories in popular culture have been the eighth and final season of “Game of Thrones” and the box-office behemoth “Avengers: Endgame,” which marks the end to a 22-film cycle of Marvel superhero movies that began in 2008 with “Iron Man.” Gilbert Cruz, the culture editor of The New York Times, moderated a conversation between James Poniewozik, chief TV critic, and A.O. Scott, co-chief film critic, about the two franchises. These are edited excerpts from the exchange, which contains spoilers.

Given the economics of the movie and TV industry, given the instant internet feedback machine and given the mechanics of storytelling since time immemorial — are satisfying endings even possible here?

Sorry, I should elaborate? A franchise this size can have a thrilling ending, a beautiful ending, a heartbreaking ending. “Game of Thrones,” for instance, may yet come up with an ending that’s satisfying to me.

A universally satisfying ending, though, is another matter. And maybe aiming for satisfaction is the problem. A megaseries, or a movie series, accumulates many masters by the end of its run. The book fans; the comics fans; the plot sticklers; the explanation-wanters; Team This Character and Team That Character. An ending can end up trying to cram in so many acknowledgments it’s like an Oscar speech.

All this business of ending got me thinking of an older fantasy megawork: “The Lord of the Rings.” (Spoilers, I guess?) I tend to doubt that anyone reading or watching the story for the first time thinks: “You know, I’m really hoping Gollum’s the one who destroys the Ring.” People want their heroes to be heroic, to prove the power of the good in them.

Instead, Frodo’s heroism isn’t good enough. It gets him almost to the end, but you need the despised, low villain to finish the job, if inadvertently. It’s a fantastic ending. But if “Rings” had been made serially — if Tolkien were getting an earful on Twitter from the Aragorn stans and the Samhive — would we have gotten it? I fear not.

A.O. SCOTT You’ve put your finger on it. The problem isn’t the serial form. There are plenty of examples throughout history of long-form episodic narratives with great endings; “The Oresteia”; “Don Quixote”; the “Ring” cycle; “The Mary Tyler Moore Show.” The problem is the fans.

Or, more precisely, with the pernicious, pseudo-democratic, commercially craven idea of “fan service,” the idea that the point of a creative endeavor is to pander in advance to constituencies whose allegiance is somehow both fanatical and always in doubt. Fan service is surely the enemy of art.

Now, as you say, it’s possible that “Thrones” will stick the landing. For the moment, though, it’s amusing and instructive to see Twitter tantrums erupt among some of the show’s most loyal partisans. Maybe their admiration always contained the seeds of disappointment, and the cultivation of enthusiasm was a prelude to betrayal. The fanaticism that is the root of the word “fan” can cut both ways.

[Looking for a spoiler-filled conversation about “Avengers: Endgame”? The film’s screenwriters answer all your questions here.]

PONIEWOZIK I guess we should define “fan service,” one of those terms that people (me included), use only as a pejorative, like “hipster.” I mean, an emotional resolution — say, Brienne being knighted for her long service — that serves fans. Do I call it fan service when creators satisfy my tastes? Of course not, because mine are noble and good! 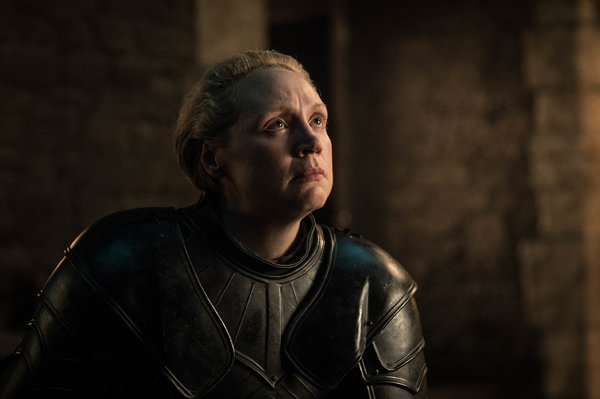 The problem is the “service” part. No one’s a servant here: Creators should be free to follow the story, and fans should be free to go elsewhere. It’s when stories become billion-dollar businesses that you get what I think of when I think of fan service, scenes that seem to exist mainly to tickle and reward superfans (like the “time heist” section of “Endgame” that operated as a clip reel of several previous films in the series).

Maybe the best visualization of fan service I’ve seen is the “Simpsons” episode in which Homer gets to design a car. It has everything he wants — a bubble dome, a bucket-size cup holder, several horns that play “La Cucaracha.” It’s perfect for him. And it’s a monstrosity. In art, you need someone to nix that cup holder.

It’s striking how much of the discussion around the endings of these two stories have to do with who’s going to die. “Endgame” foregrounded it and in the case of “Thrones,” it seemed like many were disappointed that more people didn’t die in Season 8, Episode 3’s big battle.

PONIEWOZIK “Thrones” has a special relationship with death. It’s the show that kills people! “People” here meaning, “People who are not supposed to die on TV.” It earned its bones in season one, when Ned Stark, the seeming protagonist, was decapitated. Then the Red Wedding one-upped that. No one had “plot armor” on “Thrones” — until they did, and then, even if it kept around characters you liked, it felt false.

The real betrayal may have been the resurrection of Jon Snow. It felt like the comic-book version of death, which is something akin to a bad cold. I mean I cried when Tony Stark (no relation) died. Robert Downey Jr. played the hell out of his final scenes. Those felt final, at least. But if someone sees a value in another Iron Man down the road, even another Tony Stark: hey, a lot of people can put on a suit.

This disappointment isn’t, I hope, about a morbid desire for more whackings. It’s the feeling, deep down, that an ending needs to cost something to mean something.

SCOTT Truthfully though, most endings are disappointing, at least in proportion to the complexity and interest of the story that came before. We feel let down partly because we’re just sorry something we’ve invested time and feeling in is over, but also because the force that held us in thrall is dissipating.

The classical genres sidestep this problem by spoiling everything in advance. A tragedy ends in death, a comedy in a wedding, with some suspense about who dies or who gets married. The release an audience experiences at the end is partly relief that the order of things, disrupted by the anarchic forces of violence or desire, has been restored.

Modern narrative is a different beast, of course, and what “Thrones,” which originated in a series of novels, shares with other canonical examples of the genre is a sense of multiple, branching possibilities, a thick and tangled middle full of intriguing loose ends. The tying up all that involves foreclosing some possibilities in favor of others. Solutions tend to be less exciting than mysteries.

“Avengers” works in the opposite way. Since nobody expected an ending — intellectual property never dies — the final gestures of “Infinity War” and “Endgame” had more impact, felt more consequential. The concluding blood bath (or dust bath) in “Infinity War” was a fake out, of course (I wrote about that at the time), but it still landed with some force. As did the death of Tony Stark and the old age of Steve Rogers.

And of course those denouements not only leave open the futures of other characters, but they also send the universe looping back toward the middle. What was Captain Marvel doing all that time? Is there any possible timeline where Tilda Swinton and Tessa Thompson can be on screen together?

With two such dominant franchises ending within a few weeks of each other, it feels like this is putting a period on some yet-undefined pop-culture era.

SCOTT I’m old enough to remember when series finales were a fairly rare thing. Most of the time, in the network era, shows just got canceled. The ones that made it to an official, intentional ending were a big deal, a chance for the whole family to say goodbye to people who had been guests in the living room for years.

Television doesn’t quite work that way anymore, and there’s a sense in some of the writing about “Thrones” that it’s the last of its kind. (The critic Matt Zoller Seitz argued as much in a piece in Vulture before this last season began). It’s a premium cable show, but the numbers do suggest an impressively wide appeal. The more than $2 billion global box-office take for “Endgame” has already established it as an all-time blockbuster.

Maybe we’re at the end of something more than just two popular fantasy stories. Or maybe we’re just witnessing the latest iteration of something that’s been building through the “Star Wars” and “Harry Potter” movies and the tv-is-the-new-novel prestige conversation pieces. Do “Thrones” and “Endgame” represent dinosaurs on the verge of extinction, or a new breed of alpha predator?

PONIEWOZIK TV hits, like the Targaryens’ dragons, have shrunk over the decades. “Thrones” will not approach the 106 million live viewers of the “M*A*S*H” finale, international airings and illegal downloads notwithstanding. That’s the niche culture era for you. There will still be hits, but fewer people will experience them, and, thanks to streaming, not all at the same time. TV will be more like books. But also, TV is becoming like movies! Meanwhile, Marvel movies have functionally become TV series that sell popcorn.

We’ve met, you and I, in the great gloppy muddle of 21st-century content.

SCOTT So maybe you and I should trade jobs. Or maybe we already have the same job. We can fight that out in the sequel, or the next season, or the reboot …

END_OF_DOCUMENT_TOKEN_TO_BE_REPLACED

END_OF_DOCUMENT_TOKEN_TO_BE_REPLACED
We and our partners use cookies on this site to improve our service, perform analytics, personalize advertising, measure advertising performance, and remember website preferences.Ok