Home » Entertainment » Genesis P-Orridge Has Always Been a Provocateur of the Body. Now She’s at Its Mercy.

Genesis P-Orridge Has Always Been a Provocateur of the Body. Now She’s at Its Mercy.

Neil Andrew Megson discovered Max Ernst when he was 15 years old, and it set a course for his life. The book was called “The Hundred Headless Woman,” surrealistic collages of human and animal forms. It presented the body as fluid and mutable, and the self as open to negotiation. It was the mid-1960s, and to a British schoolboy who felt he didn’t fit in — into his school, his gender, his body — this was freedom.

In the half-century since, Megson — better known as the musician and visual artist Genesis Breyer P-Orridge — has steadily probed at the boundaries of the body, both literally and figuratively, evolving from art provocateur to founder of the influential British bands Throbbing Gristle and Psychic TV to semi-established fine artist with archives at the Tate Britain. As P-Orridge now considers retiring from live music, Throbbing Gristle’s albums from the 1970s and early 1980s are newly available in deluxe reissues on Mute.

At 68, P-Orridge lives on the Lower East Side neighborhood of Manhattan in a body racked by chronic myelomonocytic leukemia.

“I’m stable right now, my blood counts are close to normal,” P-Orridge said on a recent afternoon at home, flanked by a snoring Pekingese named Musty Dagger. “But at some point it will finally flare up and become terminal, and there’s no way to know when that might be. Optimistically, two years. Less optimistically, a year, maybe six months. And then I’m on the downward slope to death.”

The artist at home: working-class English accent, Rogaine in the bathroom, black T-shirt reading “Thank God for Abortion.” Breast implants and a mouth full of metal teeth, an idea P-Orridge got from watching the movie “Belle de Jour” on LSD. Shelves full of books and artwork, mostly by P-Orridge, including various fetish objects and a wooden rabbit dotted in blood, the residue of hundreds of ketamine injections.

Since a series of operations with Jacqueline Breyer P-Orridge, P-Orridge’s wife, who died in 2007, P-Orridge prefers genderless pronouns, usually first person plural, but is O.K. with female pronouns. Her life, she said, was an experiment that was still playing out.

“We know that Neil Andrew Megson decided to create an artist, Genesis P-Orridge, and insert it into the culture,” she said. “Some people take their lives and turn them into the equivalent of a work of art. So we invented Genesis, but Gen forgot Neil, really. Does that person still exist somewhere, or did Genesis gobble him up? We don’t know the answer. But thank you, Neil.”

When P-Orridge and others branched off that year to form Throbbing Gristle, they added assaultive industrial noise and Nazi imagery to the mix. 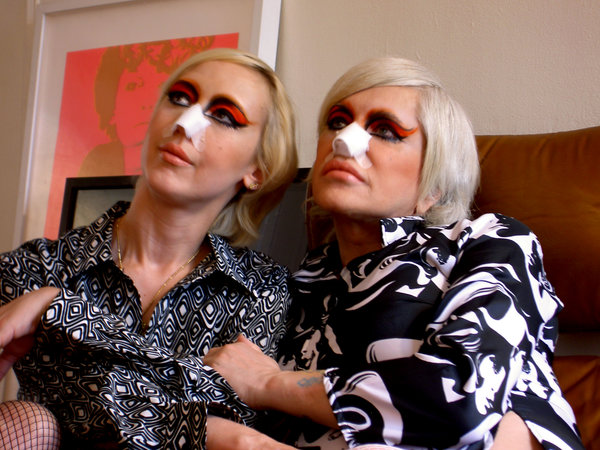 “In terms of being shocking, punk was pretty tame in comparison,” said Simon Reynolds, the author of “Rip It Up and Start Again: Postpunk 1978-1984.” “They were writing songs about serial killers and cutting themselves onstage.”

In 1981, P-Orridge reversed course in the gently trippy Psychic TV, whose danceable songs echoed the occult writings of Aleister Crowley and Austin Osman Spare, and included a tribute to Brian Jones of the Rolling Stones called “Godstar.” P-Orridge imagined the band as the center of a global consciousness raising, and recruited fans to join Thee Temple ov Psychick Youth, a cross between a fan club and a cult, whose members donned paramilitary gear and submitted bodily fluids as part of their initiation.

In 1995, after a recording session with the band Love and Rockets in the Los Angeles home of the producer Rick Rubin, P-Orridge woke up to a massive electrical fire there and jumped from a second-story window, shattering her arm and suffering post-traumatic stress disorder. Psychic TV went on hiatus, but returned in the late ’90s and again with a new lineup in 2003.

But all the time she was making collages and other visual art, including a solo show at the Rubin Museum of Art that made The New York Times’s roundup of the Best Art of 2016. And she was writing books, including, most recently, “His Name Was Master,” a collection of interviews with Brion Gysin, whose “Cut-Up” literary experiments with William S. Burroughs — splicing and recombining texts to unlock meanings — have been a driving aesthetic in P-Orridge’s work and life.

It takes a moment in the apartment to realize that the two naked blondes in a wall-sized photograph, identical of breast and chin, are P-Orridge and Lady Jaye, Jacqueline’s nickname. In the bedroom are photos of their California wedding, June 1995, Friday the 13th. Genesis was the bride. Lady Jaye wore a mustache, tight leather pants and a leather vest, nothing underneath.

Their marriage — they met at an S & M dungeon in New York, where Lady Jaye worked — began a new creative phase, this one a partnership, in which their main medium was their bodies.

They called their project the pandrogyne, the fusing of two persons into a third that only existed when they were together. P-Orridge had been an early proponent of piercing and ritual cutting or scarring. The pandrogyne was their way of applying Burroughs’s and Gysin’s “Cut-Up” technique to their own flesh.

P-Orridge, the father of two daughters from a previous marriage — she attended PTA meetings in a miniskirt and thigh-high boots — remembered calling up her daughter Genesse, saying, “‘There’s something you ought to know. Lady Jaye and myself, we got matching breast implants last week.’ And Genesse just said, ‘What? You got breast implants when you could have bought me a new car?’ That was 2003. She was about 19.”

“My daughters adore me still, despite everything that’s been unorthodox,” she added. “They don’t bat an eye. They call me Papa Gen-Gen.”

Lady Jaye had surgery on her chin and nose to match her mate’s. The couple took hormones but didn’t like them; they took ketamine, daily, and liked it so much that they often went to sleep with full syringes on their night stands, so that whoever woke up first could inject the other partner in mid-slumber.

The French filmmaker Marie Losier documented their relationship in the 2012 documentary “The Ballad of Genesis and Lady Jaye,” which ran at the Museum of Modern Art earlier this month.

The writer Douglas Rushkoff, who briefly played in Psychic TV, recalled nights in the city with Gen and Jackie, as he called the Breyer P-Orridges (like other old friends, Rushkoff refers to P-Orridge by masculine pronouns).

“He and Jackie were our most normal friends,” he said. “We’d just go to the Indian restaurant. He had weird teeth or took weird drugs or had weird art, but we would talk about what to do with savings, or how to deal with air conditioning. Just normal, mundane stuff.”

Then in 2007, Lady Jaye died of an acute heart arrhythmia. Her death left P-Orridge alone, one half of an art project that no longer had a second half.

“It became really tricky,” Rushkoff said. “To make that level of commitment, not just in marriage and love, but to do this thing to your body that doesn’t quite make sense anymore without the other half, that’s rough.”

When P-Orridge developed leukemia, Rushkoff organized a GoFundMe crowdfunding campaign that has raised almost $55,000 for her medical bills.

“We realized for the first time in a tangible way how much people care for me,” P-Orridge said. “That was really beautiful to discover. See, I’m getting teary already. That’s a good feeling, that that many people want you to stay.”

The prankishness of P-Orridge’s work sometimes distracts people from the art itself, said Jarrett Earnest, 31, an art critic and curator who met her at a performance piece by Leigha Mason called “Spit Banquet,” in which people sat at a table and spat into empty vessels.

“What she’s done as a thinker and as a maker, this has not been understood in the wider art world,” Earnest said. “People in the music world know her in a specific way. But her writing and her ideas about culture and the relationship of life to art are so profound.”

Earnest added: “She does a lot to play the part of the cartoon, because there’s a part of her that’s really silly. She is those things, but at the same time this sweet, profound, authentic person. It’s not just someone with weird teeth who looks like a cult leader.”

On another afternoon in October, P-Orridge wore a T-shirt that read “Cult Leader.” She was recovering from pneumonia, preparing to travel to Europe for two concerts, the last two dates in an otherwise scrapped tour. After that, she said, she did not expect to tour again, because her health was too unpredictable.

And she was in love, with a woman she’d met in Granada a few years back.

“We certainly didn’t expect it, at our age,” she said. “What a beautiful surprise it was to be in love again. She’s 28. It’s ridiculous, but what can you do, man?”

In the last year, an old bandmate and girlfriend, known as Cosey Fanni Tutti, accused P-Orridge in a memoir of being physically and emotionally abusive. P-Orridge said she had not seen the book, but denied the allegations. “Whatever sells a book sells a book,” she said.

And she was busy, preparing two volumes of her notebooks from the 1960s and a graphic novel called “Man Into Wolf,” whose title comes from a 1948 book about sadism, masochism and werewolves. Museums, she said, were calling about new and old work.

“Derek Jarman said, ‘Gen, when they know you’ve got a terminal illness, they start liking what you do,’” she said, referring to the director and author. “‘You wait and see.’ And now people want the art in art exhibitions.”

If there is a next chapter, P-Orridge hopes it will be to form a collective community, with people sharing resources but having more privacy than in a commune. The ‘60s dream still drives her.

“When you’ve got a terminal illness, you think about what your legacy might be,” she said. “My only answer is, we would hope that it would inspire people to see that they can do a life totally as they would like it to unfold. Live your life every day like a page in your book of life, and make that page as interesting as you can. Whenever you have a choice, say: Which is the better page in my book?”

She said she was not afraid of death. “I’d like to stay, because it’s fascinating here,” she said. “But as far as we can tell, having a physical body is a luxury we don’t often get, and too many people squander that luxury.”

She smiled, a mouthful of gleaming metal. “We’ve not squandered it,” she said. “We’ve utilized it to the maximum we could.”