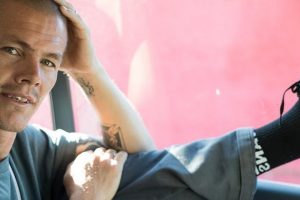 It’s been almost 30 years since Geoff Rowley first picked up a skateboard in Liverpool. Just five years later, Rowley packed his bags and left for Long Beach, beginning a career that has taken in a long-standing Vans collaboration, a Thrasher Skater of the Year award and his ascent to becoming, arguably, the most famous skater that the U.K. has ever produced.

Over the course of that career, Rowley has seen skateboarding move from niche pursuit to Olympic sport. “I don’t think the average person thinks we’re as much of a dirtbag as they used to,” Rowley jokes. “The biggest change is just that people are aware of it now. People weren’t that aware of it 20 years ago. When I moved to the United States in 1994, there was still a huge stigma attached to being a skateboarder. You were still screamed at from cars on the side of the road, just like I was the whole time I was growing up in England. That’s changed now, people have accepted it into culture more.”

The cultural impact of skateboarding is a story that’s been told a thousand times, but it’s crossover appeal has never been clearer. Luxury houses from Lanvin to Dior have released skate-inspired footwear, while films including Mid ‘90s and North Hollywood show how skating is taking to the silver screen.

“When I moved to the United States in 1994, you were still screamed at from cars on the side of the road. That’s changed now, people have accepted it into culture more.”

Rowley puts the roots of this cultural acceptance at the turn of the millennium, when skateboarding began to overlap with mainstream culture. “Tony Hawk Pro Skater 1 and 2 played a big role in that, in showing people how cool skateboarding was, how visually interesting it was,” he explains. “Then you had the Bam [Margera] TV shows, and the Rob Dyrdek show and the Jackass show, all layered behind that. I think it was like a one-two punch. All of that stuff allowed skateboarding to grow its global appeal.”

This year is a big year for skateboarding, with the potential for a new era to begin. Next month, the Tokyo Olympics will begin following a 12 month delay, officially welcoming skateboarding into the world’s biggest sporting event. Skateboarding’s Olympic debut shortly after Tony Hawk Pro Skater 1 and 2 were reissued for next-generation consoles, opening up the games to a new generation of fans.

“The Olympics are coming up, that’s going to change things,” Rowley adds. “It’ll put skateboarding into people’s houses in more places than it ever has done. It’ll be interesting to see what effect that has on it. But having the Olympics and the Tony Hawk video games relaunching on new platforms at the same time is definitely going to have a positive impact and it’s definitely going to expose skateboarding to a new generation. Why wouldn’t it? The game’s fantastic.”

Being featured in the series had a huge impact on Rowley’s career when it first arrived, as the first installment of Tony Hawk Pro Skater arrived the same year as Rowley’s first Vans signature shoe. He once again features on the reissued games, appearing alongside a wave of new talents. As well as Rowley, Hawk and other skaters of that era, names such as Nyjah Huston and Tyshawn Jones have been introduced for the games. “Hopefully it’ll be a huge catalyst to get kids to pick up skateboards and start skateboarding,” he adds. “Hopefully they’ll remember the names of people who are in those games, the newer generation, and go buy their boards, start skating and have a positive impact.”

“If you’re not constantly watching what’s happening in the industry, you’re going to get left behind.”

While Rowley is optimistic that Tony Hawk Pro Skater 1 and 2’s launch will benefit skateboarding, he echoes many others in the industry when he voices doubts about the Olympics. “I think they’ll show it the way they want to show it,” he says. “Skateboarding is a lot more exciting, especially in person, than a lot of these other sports. That’ll be one benefit, that you’ll be able to see that the people there are really loving it and enjoying it. But in terms of my skateboarding, I’m not interested in that kind of competitive skateboarding. That doesn’t push me, personally. But it’s a positive thing, and it’s going to do good things for the industry, whether I like it or not.”

Away from the Olympics and the Tony Hawk games, Rowley partly credits the new developments to the internet, and the volume of clips uploaded every day. “If you’re not constantly watching what’s happening in the industry, you’re going to get left behind,” he says. “We’re in a washing machine of progression right now, and if I put my head down I’m going to miss a lot.”

But Rowley is optimistic about the future of the sport. “Every ten years, I think we have a flux of change,” Rowley explains, adding that he is excited about the new phase that skateboarding is entering. “I think we’re going through that now in regards to the tricks that people are developing, and just the direction of the industry. It’s progressing, it’s developing. I’m stoked on the new styles that are coming into skateboarding, and the different ways that people are learning to manipulate their board. The long-established ways of street skating are being exploded apart. I’ve been waiting for that.”
Source: Read Full Article