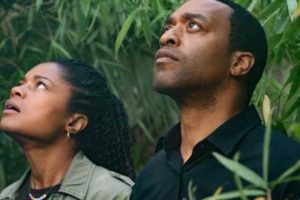 Inspired by the iconic David Bowie film, Showtime’s upcoming TV series The Man Who Fell To Earth follows an alien who travels to Earth on a serious rescue mission.

Hear the words The Man Who Fell To Earth and chances are an image of David Bowie in the iconic 1976 film will spring to mind. Despite bombing at the box office, the arthouse flick has gained a beloved following over the years thanks to its mesmerising surrealist imagery and the late musician’s heartfelt performance as a humanoid alien.

This April, a new incarnation of the 1963 Walter Tevis novel is set to land on our TV screens by way of a Showtime series starring Chiwetel Ejiofor and Naomie Harris.

Inspired by both Tevis’s novel and Bowie’s original film, The Man Who Fell To Earth follows an extraterrestrial named Faraday who arrives on Earth at a turning point in human evolution and must confront his own past to determine our future.

There’ll be plenty of star power in the next sci-fi adaptation, too. Chiwetel Ejiofor (12 Years A Slave) will play the titular alien, while fellow Academy Award nominee Naomie Harris (Moonlight) takes on the role of Justin Falls, a brilliant scientist and engineer.

Bill Nighy, meanwhile, has recently been announced as Thomas Newton, the main character of the novel and the alien played by Bowie in the original film who has now been living on Earth for over 40 years.

In a newly released trailer from Showtime, The Man Who Fell To Earth provides a first look at Ejiofor’s alien arriving on Earth at a pivotal point in history, as well as his mission to save the world in addition to his wife and daughter back on his home planet. Check it out:

Ejiofor, who also serves as executive producer, has previously spoken about his desire to represent a wide array of stories on screen.

“I think it’s a very exciting time for diversity in cinema,” he said during IndieWire’s 2019 Sundance Studio. “Of course, all these different perspectives from very powerful media industries and these different points of view actually affect the nature and the psychology of the societies that we’re all in, and that’s been part of the problem — that when things are related from only one point of view, that it kind of shuts down the conversation across the board in a cultural context.

The Man Who Fell To Earth premieres 24 April on Showtime in the US, with a UK release date yet to be announced.