Get to Know Spencer: The Engineer Who Snagged Tayshia's First Impression Rose 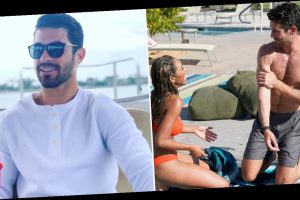 From the moment Spencer Robertson stepped out of the limo during The Bachelorette, Tayshia Adams knew she hit the jackpot. On Tuesday night, Chris Harrison introduced four new handsome men into Tayshia’s life, and it’s safe to say they were each prepared for what awaited them, especially Spencer, who was the first one out of the limo. “Which one of you guys scared away Clare?” he immediately asked the 16 dudes sitting inside the La Quinta Resort. OK, so Spencer definitely made an impression on viewers, on the other contestants, and undoubtedly on Tayshia, as we saw her give him the first impression rose.

Before we start daydreaming about the beautiful couple Tayshia and Spencer make, let’s get to know the man behind said rose. Who is Spencer Robertson, anyway? According to his bio on ABC, the 30-year-old from La Jolla, CA, is a water treatment engineer. He studied chemistry at the University of Oregon, where he also played division I lacrosse for four years. Not only that, Spencer was captain of the team during his senior year! He’s since founded his company, Robertson Water Treatment. Yeah, we’ll just go right ahead and call him a catch.

Spencer and the four new guys have definitely shaken things up in the Bachelorette mansion, and he’s already making himself known with the guys and Tayshia. Check out photos of Spencer ahead, and then meet some other contestants here.