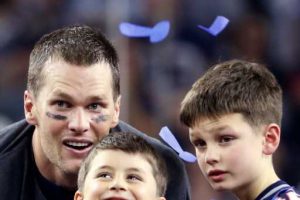 There’s a lot of pressure when your dad is a legendary football player like Tom Brady, even if you play the sport for fun, everyone is expecting those same skills out there on the field. The Tampa Bay Buccaneers player’s oldest son, Jack Moynahan, 14, from his relationship with actress Bridget Moynahan, is already showing some major talent — and dad got a little too excited about it.

In the Nov. 30 episode of his SiriusXM podcast, Let’s Go! With Tom Brady, Larry Fitzgerald and Jim Gray, Brady revealed that his future plans for his son got the best of him. While the duo watched his alma mater, University of Michigan, play against Ohio State University, the athlete pictured his son as “a future Wolverine.” He shared, “I saw the joy in that stadium and the crowd rushed the field. …As I was jumping around [in bed] and we were wrestling, I said, ‘That’s where you’re gonna be! You’re gonna be in the Big House someday. You’re gonna be the starting quarterback for Michigan.’”

But someone in his family told him to slow his roll: wife Gisele Bündchen. She doesn’t want those grand expectations placed on her stepson and reminded her husband that they should “just let [Jack] be what he wants to be, for God’s sake.” And that’s pretty sound advice given the fact that he’s still a young teen and while he may turn out to be a player like his dad — he might also decide to pursue another sport or do something completely outside the athletic world.

That’s something he already experienced with his youngest son with Bündchen, Benjamin Brady, 11. While Jack loves to compete out there on the field, his middle child is not interested in playing football at all. “When Benny came along, I thought he would be just like Jack… [who] is just like me,” Brady told Men’s Health in 2019. “So I was like, ‘C’mon, let’s do this.’ And he was like, ‘Nope.’ And I was like, ‘What? No, do this!’ [And Gisele kept] saying to me, ‘Would you effing understand that your son is different?’”

Before you go, click here to see more famous football families we love.