Home » Entertainment » Give Us A Clue: Hilary Barry hits back over show’s negative reviews

Give Us A Clue: Hilary Barry hits back over show’s negative reviews 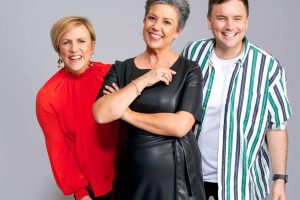 Hilary Barry has taken to Twitter to celebrate Give Us a Clue’s ratings and alluded to the show’s not-so favourable reviews.

The charades-style game show proved to be a hit with audiences when it screened last night – it took out the 7.30pm ratings, Barry says.

Barry posted a cheeky tweet on Thursday celebrating the show’s ratings: “Thanks to everyone who watched Give us a Clue last night. It was the top rating show in its slot! #theonlyreviewthatmatters.”

A TVNZ spokesperson confirmed that the show was “number one in its time slot for total audience as well as in TVNZ 1s commercial demographic of 25-54 (as well as 18-49)”.

And Barry’s hashtag appeared to be a subtle jab about some of the show’s negative reviews.

The Herald’s entertainment critic Karl Puschmann was one of those reviewers sharing their opinion on the primetime show. While he noted Bennett gave it “the good ol’ Kiwi go” he argued that “there were no stakes. Nothing to get behind. The teams weren’t playing for anything except bragging rights. And who cares about that?”

“Either be a family show or don’t. Pick a lane,” he added, noting the show’s tendency towards some inappropriate jokes.

And it appears some of the replies to Barry’s tweet echoed her sentiments.

“Loved it!” shared a keen new fan of the show.

“Loved it to bits, thought the casting was superb,” another wrote.”This was refreshing and genuine.”

“Watched the show last night, wasn’t as bad as I thought it was going to be, I think you would probably be a better host though,” another added.

Barry replied: “But then I wouldn’t get to do any charades – that’s the fun bit!”

According to the TVNZ spokesperson, the show had an average audience of 379,000, something which they credited to the shows “star power”.

“We’re thrilled with the launch of Give Us a Clue and its dominance in the 7.30pmtime slot. The star power combination of Hilary Barry, Paula Bennett and Tom Sainsbury, along with the energy of the guest celebrities and popular format has made it a ratings winner with viewers.”

• Give Us A Clue screens Wednesday nights on TVNZ 1