Duncan Lyle, an American Ballet Theater dancer, was encouraging two colleagues who were finding their way around a tricky partnering passage of his design. It required precise timing for the woman, Courtney Shealy, to look spontaneous while not tipping off point or smashing into her partner, Carlos Gonzalez. After a few tries, it was starting to look organic.

It was a gray November afternoon in the second week of ABT Incubator, a new choreographic workshop. The rehearsal felt amicable, open, with no sense of hierarchy among the three dancers.

“In the studio we’re so often created on,” David Hallberg, the American Ballet Theater principal who created the workshop, said recently. “I really wanted to give the dancers a chance to have a more inclusive part in the creative process.” Mr. Hallberg first introduced the idea of a choreographic workshop in 2010, but after a few tries it didn’t stick and he was too busy with his international career (and a major injury) to help keep it going. Now, he’s determined to make the Incubator a yearly fixture at Ballet Theater. 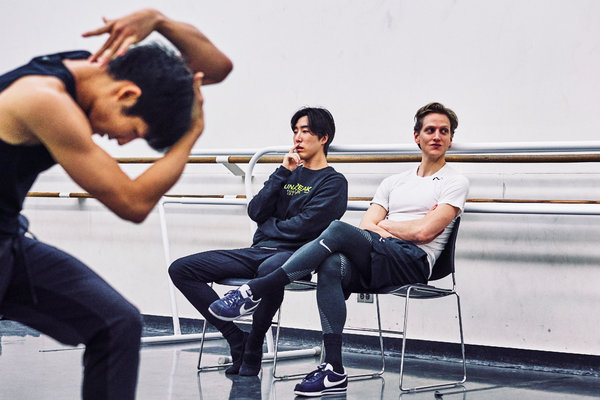 Many modern and contemporary companies, including Alvin Ailey American Dance Theater and Hubbard Street Dance Chicago, have such workshops. So do a few ballet companies, among them Pacific Northwest Ballet and New York City Ballet. Still, in ballet, where the need for new voices is always in tension with the draw of traditional repertory, they are something of a rarity.

“I’m not reinventing the wheel,” Mr. Hallberg said in an interview in June, when the first Incubator auditions were being held, “but I saw a deficiency at A.B.T. There wasn’t an opportunity for choreographers just starting out to get into the studio with their colleagues.”

At the auditions, in June and September, most of the applicants brought a couple of friends to dance a few minutes of choreography they had worked out during previous weeks. Only one, Kelsey Grills, illustrated her ideas in a solo she performed herself. A seven-person panel made up of people from Ballet Theater — including the company’s director, Kevin McKenzie — and outside advisers picked the participants.

Five choreographers were chosen: three from Ballet Theater — James Whiteside, a principal, and Mr. Lyle and Sung Woo Han, from the corps — and two from outside, Ms. Grills and Gabrielle Lamb.

They were given two weeks, just after the end of Ballet Theater’s fall season, to create something — no need to come up with a finished dance — with only an informal, private showing at the end. As Mr. Hallberg said, “this is about the process, not the product.”

I followed three of them as they planned, rehearsed and finally presented their projects: Mr. Han and Mr. Lyle of Ballet Theater; and Ms. Grills, an independent choreographer who works as a video editor for Dance Magazine.

In a Ballet Theater studio, Mr. Lyle was working on a trio inspired by the tormented love triangle of Brick, Skipper and Maggie in the 1958 film adaptation of Tennessee Williams’s “Cat on a Hot Tin Roof.” “For me,” he said in an interview before rehearsals began, “every piece always has a story.”

Mr. Lyle, 28, has been making dances since high school in Melbourne, Australia. He had already caught the eye of Ballet Theater’s choreographer in residence, Alexei Ratmansky, who got his own start at a choreographic workshop. “You can always see the choreographer in any group,” Mr. Ratmansky said of him. “They get the structure. They watch you closely.”

In rehearsal, Mr. Lyle kept the musical score, Bernard Herrmann’s “Echoes,” close at hand, annotated with cues related to important junctures in the story’s arc. Beyond that structure, he said, he came into the studio without a specific plan, preferring to work out the steps directly with the dancers. The work drew from the traditional language of ballet, including point shoes for the women.

As the dancers moved toward and away from each other, he periodically stopped them to make small, precise adjustments. Sometimes they were about timing, or about a particular quality he was looking for, usually connected to the relationship he was trying to portray. “You can turn around to escape,” he told Ms. Shealy in the Maggie role, “but he’s pulling you back.”

Down the hall, Sung Woo Han, 25, was working with five dancers — four men and one woman — on something that looked almost like a dystopian video game, set to a grinding electronic score. A central figure twitched and pulled at her fingernails while the others thrashed and lunged, low to the ground. Eventually, she fought them off, like a superhero.

“We were all taken aback by what he showed at the audition,” Mr. Hallberg said. “He’s so quiet and nice, and out comes this bold, aggressive movement.”

The idea for Mr. Han’s ballet came out of his own emotional life: “I want to express the conflict I sometimes feel between me and the world, when I get negative or depressed,” he said before the rehearsal. This would be his first choreographed piece, not counting a short solo he created for his graduate performance at the Korean National University of Arts.

He came up with most of the movement before going into the studio. He said he drew from actions he saw around him, in the real world: “People praying or crying. Normal life, how people move or react. I try to watch.”

In one section, the dancers moved together in a clump, almost like zombies, repeatedly falling to the floor. Mr. Han had a very specific idea about how they should fall, so he did it with them, head flung back, knees buckling. “It should be strong, like something exploding,” he said, and they tried again, each time coming closer to what he had shown.

In a downstairs studio, Kelsey Grills, 25, and four dancers (three women and one man) were sitting on chairs. Daniel Johnston’s mournful ballad “The Story of an Artist” was playing on the sound system, and two dancers were engaged in a silent conversation built out of small gestures: a wipe of the brow, a turn of the face, a shake of the hand.

Much of the choreography, Ms. Grills said later, had come out of improvisation exercises she had developed. Like this one: “I asked them to write a letter to someone they love and to someone they can’t love, and interpret that through movement.”

She said she tends to draw ideas and images from literary sources, in this case Sarah Ruhl’s “Eurydice,” a retelling of the Orpheus myth from the perspective of his dead lover, pulled between the underworld and the world of the living.

The dancers looked remarkably relaxed, their bodies freed from the upright, elongated carriage of ballet. Because Ms. Grills’s background is in contemporary dance — she has a B.F.A. from Florida State University — part of her work had been to help the dancers free themselves to move simply, without affectation.

When they weren’t sitting, the dancers’ movements were mostly simple: walking, sliding, falling, teetering on tiptoe. There was no partnering, or even touching. The music provided an emotional undertone rather than a tight structure. They had picked it together, after listening to various selections.

Were the dancers comfortable improvising and moving in such an unspectacular manner? “It was hard for them at first,” she said. “But they were so game.”

At the showing, on Nov. 10, a bare studio was set up with three rows of plastic chairs, filled with dancers, donors — the dancers’ salaries have to be paid — and guests. Mr. Hallberg played host, calling up the choreographers one by one to ask them about their process.

Whether the Incubator will jump-start careers as the earlier Innovation Initiative did with Gemma Bond, a Ballet Theater dancer and increasingly busy choreographer, remains an open question. For now, it is still figuring out exactly how much support and instruction it should provide to the aspiring choreographers. Should it offer mentoring, as Ailey’s Choreographic Lab does? Or composition classes, as Juilliard does? As the choreographer Jessica Lang, one of the seven-person panel, said in an interview: “What are we are trying to do? What is the goal?”

For the dancers involved, the answer may be simple. Ms. Shealy said: “In the corps, we’re used to mainly staying in line. I really needed it as a person and as a dancer.”