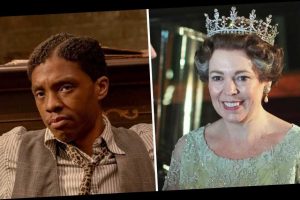 Kicking off 2021 with a bang. The first awards show of the year debuts on Sunday, February 28, featuring the biggest stars in both movies and television.

For the first time ever, the Golden Globes will be hosted live from two locations. While Tina Fey will be at the Rainbow Room atop Rockefeller Center in New York City, her cohost, Amy Poehler, will be live at the Beverly Hilton hotel — where the Globes usually take place — in Beverly Hills.

Though it’s the first time the show will have hosts on different coasts, this marks the fourth time cohosting for former Saturday Night Live costars Fey, 50, and Poehler, 49. The duo helmed the big show in 2013, 2014 and 2015. Due to the coronavirus pandemic, some presenters and nominees will be Zooming in while others will be in person, much like the Emmys’ format in September 2020.

Netflix dominated the nominations list with 42 total nods, honoring Mank, The Trial of the Chicago 7, The Queen’s Gambit and The Crown. Amazon and Hulu followed with 10 nods each. Amazon is the home of Borat Subsequent Moviefilm and Small Axe, while Normal People and Palm Springs live on Hulu.

The Crown landed more nominations than any other TV show with six honors, followed by Schitt’s Creek with five.

So, who will bring home the big awards? Tune in to NBC Sunday, February 28, at 8 p.m. ET. Scroll through the gallery below for the full list of nominees, with winners to be added as announced: