Home » Entertainment » Gone but Never Forgotten in a Quilt

Gone but Never Forgotten in a Quilt 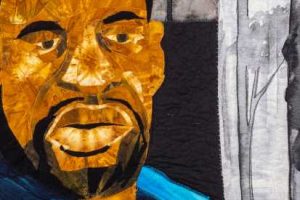 Peggie Hartwell, a fourth-generation quilter from South Carolina, has found it hard to return to her needlework since she completed “Ode to George Floyd,” in which she renders Mr. Floyd’s face in subtle brown batiks, and an image of his mother barely visible behind a grove of trees. “I had to talk to him, get to know him,” the 81-year-old quilter said of the process. “I pick up a piece of fabric and see his face.”

Ms. Hartwell’s “Ode to George Floyd” is featured in “We Are the Story,” one of a series of quilt exhibitions at seven sites throughout the Twin Cities, Minneapolis and St. Paul, presented by the Textile Center and the national Women of Color Quilters Network. The first exhibition, “Gone but Never Forgotten: Remembering Those Lost to Police Brutality,” is on view at the Textile Center in Minneapolis, by appointment and online, through Dec. 24, and other shows run through the spring.

The very titles — among them, “Cracked Justice,” “Dear White People,” and “Somebody’s Child” — speak to the power of the needle as a vehicle for social justice and advocacy. “When people think of quilts, they think about warmth and security,” said Carolyn Mazloomi, who curated the exhibitions and is the network’s founder. “So they can be a kind of soft landing — a way to tell the story of difficult topics.” 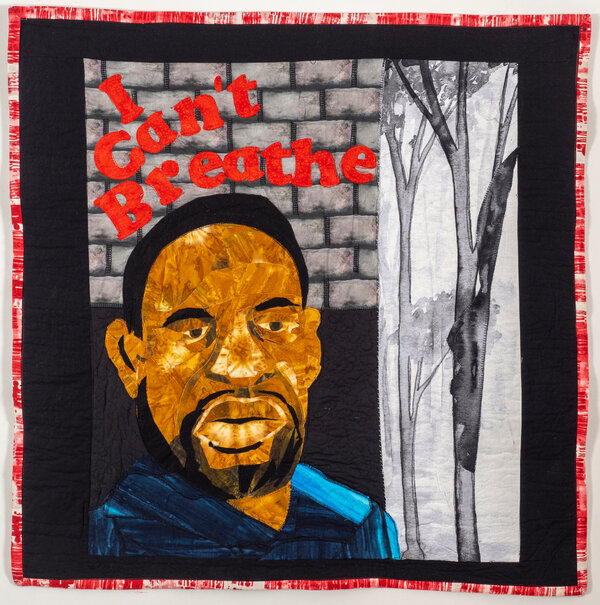 Dr. Mazloomi, an N.E.A. National Heritage Fellow and former aerospace engineer, organized the exhibitions shortly after Mr. Floyd’s death. About 500 quilters — mothers, grandmothers and great-grandmothers (average age 74) submitted more than 400 quilts on a ferocious deadline. “When George Floyd called out for his mama, that just crushed me,” said Dr. Mazloomi, who has two sons and three grandsons. “We lived through the Civil Rights and Jim Crow eras,” she added. “They took a toll. For me, it has been like reliving the 1950s all over again.”

For many of the quilters Mr. Floyd’s murder and its aftermath have been compounded by the pandemic: 18 members of the network have died of Covid-19. In proactive fashion, their quilting sisters leapt into action, sewing thousands of masks and donating them to hospitals and emergency medical workers.

Every stitch tells a story. Although the improvisational geometric quilts by women from the African-American hamlet of Gee’s Bend, Ala., created a rhapsodic stir when they debuted, the most popular genre among contemporary makers is the narrative quilt — artistic works not typically intended to dress a bed. The notion of quilters as storytellers may date to the ‘griot,’ the keepers of oral traditions in villages throughout West Africa. Quilts have been deployed throughout American history as instruments for social change, from Elizabeth Hobbs Keckley, a slave who used her gifts as a seamstress to win freedom for her and her son, to the massive NAMES Project AIDS Memorial Quilt of 1987 resplendently laid out on the National Mall.

“Quilts can be very subversive, drawing you in and then shifting the conversation,” said Mary Savig, curator of craft for the Smithsonian American Art Museum’s Renwick Gallery. “They’ve been a way for women to gather and have political discourse and get away with it.”

The quilters network, she added, “has been on the pulse of contemporary culture.” In a sense, it’s a quilting bee writ large. Founded in 1985, the network brought together lone quilters — most of them African-American — into a community. Dr. Mazloomi tapped into a passion that was in stark contrast to an earlier generation of women who made quilts out of necessity.

Since then, Dr. Mazloomi has curated some 25 exhibitions, documenting the quilts and highlighting their significance and value. But finding material is a perpetual challenge. “Most women are making quilts for their families,” she said. “They don’t give a hoot if somebody sees them or not.”

Many of the quilters around the country represented in the Twin Cities’ exhibitions draw thematically on their personal experiences. Ed Johnetta Miller, for instance, created a quilt called “I Have Known Injustice All My Life,” while ensconced in her Queen Anne house in Hartford, Conn., during the pandemic. She began making lists in her head: There was the moment when she and her husband, James Arthur Miller, who died in 2015, were pulled over while driving their daughter to private school because their brand-new Camry had a dirty license plate. The times when she was followed by security guards at the supermarket. The day her husband, an English and American Studies professor at Trinity College, was asked for his identification by campus police. “It gets to the point where you have all this hemmed up in you and it boils over,” she said.

Ms. Miller, who has been a cultural envoy to the State Department, collects Ghanaian embroideries, Indonesian ikats, silk robes from Kyoto and other global textiles, which she squirrels away until the opportune moment when they seem right for a particular quilt. Her piece for the current show at the Textile Center in Minneapolis weaves Black Lives Matter newspaper headlines and other motifs into bold red, white and black geometric patterns. The colors suggest “the blood we’ve shared, the blackness of us,” she said. (The show, “Racism: In the Face of Hate We Resist,” runs from March 26 — June 12, 2021).

Dorothy Burge of Chicago began making art quilts, teaching herself the craft by watching HGTV’s “Simply Quilts.” Her approach shifted profoundly after Trayvon Martin was fatally shot in 2012. She wound up superimposing a photograph of her grandson’s nephew in a hoodie with images of Skittles and iced tea, a reference to the snack Mr. Martin was holding. She has become a leading voice on human rights issues, especially on justice for survivors of police torture in Chicago.

Her quilts in four solo exhibitions in Minneapolis include one memorializing Laquan McDonald, another Black teenager in Chicago who was fatally shot by police. Ms. Burge consulted the autopsy reports to replicate the precise location of each bullet. She shredded the fabric and placed a red crystal in each spot, rendering the impact of gunfire in cloth.

The sobering messages of many of the quilts are balanced by the quilters’ aesthetic gifts. Trained as a fine artist, Carolyn Crump combines painting, silk screen, block printing, stenciling and pencil, pen and ink for “Cracked Justice,” capturing the George Floyd protests in a colorful and energetic street scene that includes looters, tear gas and a graffiti artist spray-painting a memorial.

Sharon Kerry-Harlan of Wauwatosa, Wis., addresses voting rights in “Bloody Sunday,” her striking interpretation of the attempted march from Selma to Montgomery in which demonstrators demanding the right to vote for Blacks were brutally attacked by state troopers. The quilt is a haunting field of abstract faces bordered by American flags.

Sylvia Hernandez, whose Facebook page is “Brooklyn Quilt Girl,” was inspired by an aerial view of the giant Black Lives Matter message on Pennsylvania Avenue in Washington, D.C., and channels the patterns of the street grid. She and L’Merchie Frazier, a Boston quilter whose powerful work resembles paintings, also have solo exhibitions.

The fabric itself can speak volumes. In “A Triptych of Evil,” a commentary on slavery, lynching and mass incarceration, Trish Williams, from Peoria, Ill., uses hemp twine to tie paper effigies onto burned red organza, which has the visual effect of bathing the piece in blood.

Ms. Williams considers Dr. Mazloomi to be a both cheerleader and critic. “I don’t think anyone is ever offended if she says a quilt doesn’t belong,” she said, referring to her curatorial role. “Honestly, my quilts would probably be in trunks in the basement if it hadn’t been for her.”

Several weeks ago, Dr. Mazloomi was shaken by an incident in a Costco parking lot in which a white man with a gun started spewing racial epithets at her and her husband, an Iranian-born engineer. The man threatened to ram the couple’s car because they weren’t driving fast enough.

Still reeling, she funneled her distress into the meditative calm of a quilt, stitching the top, back and batting together in repetitive motions, an act she says is conducive to thinking things through, to giving the mind a rest.

And she has already drawn sketches of the rage in the man’s eyes, which she likens to lighting. Her feeling that “nowhere is safe” will be the subject of a new quilt someday.

END_OF_DOCUMENT_TOKEN_TO_BE_REPLACED

END_OF_DOCUMENT_TOKEN_TO_BE_REPLACED
We and our partners use cookies on this site to improve our service, perform analytics, personalize advertising, measure advertising performance, and remember website preferences.Ok