Home » Entertainment » Grey’s Anatomy’s Exits: Who Quit? Who Was Fired? Who Is Down to Come Back?

Grey’s Anatomy’s Exits: Who Quit? Who Was Fired? Who Is Down to Come Back? 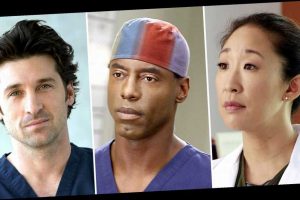 Created by Shonda Rhimes and starring Ellen Pompeo, Grey’s Anatomy debuted on ABC in 2005. While the actress who plays Meredith Grey has admitted that she’s nearly walked away in the past, Pompeo is one of the only original cast members still on the series as of season 17. Chandra Wilson (Miranda Bailey) and James Pickens Jr. (Richard Webber) are the only other two OGs remaining.

Even Rhimes left ABC in 2017, handing the reins over to Krista Vernoff to take over as showrunner.

“On every show I’ve ever worked on, there are stories you wish you could have told differently, but they were derailed by a behind-the-scenes issue. And that’s the thing that fans don’t understand,” Vernoff, who worked on seasons 1-7 of Grey’s before returning for season 14, told the Los Angeles Times in November 2020. “So, if you’re responding to fan outcries, you can go crazy because you want to tell them: ‘If some couple broke up really suddenly in the middle of what was a really exceedingly beautiful arc, that probably wasn’t what the writers wanted! There was probably some s—t happening behind the scenes that we had to stay up all night rewriting scripts to try to have any semblance of a story to tell.’ That’s why writers have producer titles in television because you’re not spending two years writing a script and then that’s a perfect script and then you’re shipping it up for people to shoot. There are personalities involved.”

Vernoff cited Heigl’s unprecedented exit during the middle of season 6 as an example.

“There was a resolution to Izzie’s story. We had planned to have her come back for an episode to really properly tie up Izzie and Alex (Chambers). And I wrote that episode, and it was beautiful. The day before it was supposed to start prepping or shooting, I can’t remember, we got a call that Katie wasn’t coming. Just wasn’t coming. Wasn’t going to do it,” the writer said. “It became my job to stay up all night for multiple nights and reimagine a script that didn’t include Izzie. And for years and years and years and years and years, the fans scream at us, ‘How could you?’ Well, that’s the behind-the-scenes story. That’s what happened. I’m not saying that to bash Katie. I don’t know what was happening in her life.”

Sources close to Heigel, however, tell Us that “Vernoff is mistaken” when it comes to the actress’ exit from the series. “Katherine was back in L.A. after parental leave (when she adopted her daughter) waiting to be called to set,” the sources said.

While Heigl has yet to return since her departure in 2010, Dempsey made headlines in November 2020 when his character, who died during season 11, made an expected appearance in the season 17 premiere.

“Patrick and Ellen and I were all there at the beginning of this; I wasn’t there for the pilot, but I was there for the first seven seasons, and that was 17 years ago,” Vernoff told Deadline at the time. “That was, like, a lifetime ago; my kids weren’t alive. It was so wild to walk out on that beach, and just be together again as these different people that we are now. But I can’t overstate how joyful and healing an experience this was.”

But why did Dempsey leave Grey’s Anatomy in the first place? Scroll through a breakdown of the reasons behind the show’s biggest exits: