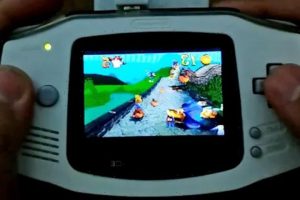 If you’ve had your Game Boy Advance for two decades now and you’ve exhausted all the games you can play, YouTube hacker Rodrigo Alfonso is here to help you breathe new life into the classic handheld.

As seen in a series of videos Alfonso has uploaded, the tinkerer managed to get original PlayStation games to run on the little device using a custom cartridge that carries a Raspberry Pi 3 mini-computer working in tandem with the RetroPie emulator. Essentially, the game runs on a separate system that’s connected to the Game Boy and streams both your control inputs as well as the video via the handheld’s Link Port which was previously used for local multiplayer connections.

As Engadget points out, you won’t get bi-directional transfer speeds of more than 1.6Mbps, although even within those confines the console is able to run titles such as Spyro the Dragon or Crash Bandicoot at playable frame rates. If you’re looking for even better performance, you can either lower the stream resolution or even overclock the device’s processor.

If you’re looking to try this out yourself, you can check out Alfonso’s build guide down below.