The wait was long. More than three decades, in fact.

But on Sunday night, two African-American women won Oscars in nonacting categories: Hannah Beachler for production design and Ruth E. Carter for costume design, both for their work on “Black Panther.” They became the first African-American women to win Oscars in their categories, and the first to win in a nonacting category since Irene Cara in 1984, who won for best original song, “Flashdance…What A Feeling,” which she co-wrote.

[Read our analysis of the Oscars ceremony, and see the best looks from the red carpet.]

And Sunday night’s wins were perhaps appropriate given that the film they won for was a barrier-breaking spectacle and a box office smash. While there has been more progress in the high-profile Oscar categories in recognizing people of color, that advancement has historically been limited to onscreen work.

Beachler and Carter were instrumental in bringing to life the lush Wakanda, the fictional African country where most of “Black Panther” takes place. Carter, whose career stretches three decades, went to great lengths, like using a 3-D printer, to authentically create costumes influenced by indigenous people across the African continent. Beachler’s mapping of Wakanda was essential in helping Carter execute that vision. 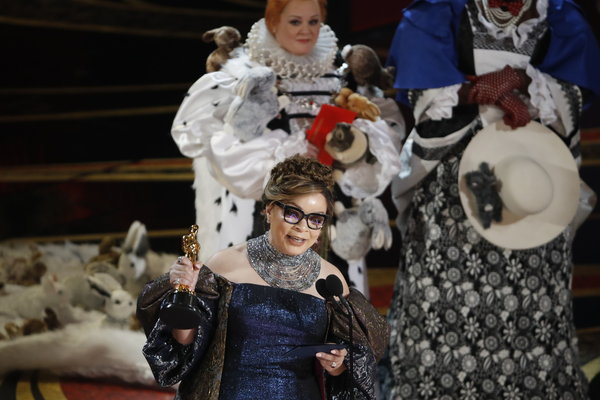 “This has been a long time coming,” Carter said in her acceptance speech. She had been nominated twice before: “Amistad” (1997) and “Malcolm X” (1992). (“Malcolm X” was directed by Spike Lee, who was up for multiple Oscars of his own on Sunday.)

“Marvel may have created the first black superhero, but through costume design, we turned him into an African king,” Carter added. “It’s been my life’s honor to create costumes. Thank you to the academy. Thank you for honoring African royalty and the empowered way women can look and lead onscreen.”

In Beachler’s acceptance speech, she paid tribute to the director of “Black Panther,” Ryan Coogler, along with Marvel, and Rachel Morrison, the film’s cinematographer, who last year became the first woman nominated for an Oscar in the cinematography category.

“I give the strength to all of those who come next, to keep going, to never give up,” Beachler said through tears. “And when you think it’s impossible, just remember to say this piece of advice I got from a very wise woman: I did my best, and my best is good enough.”