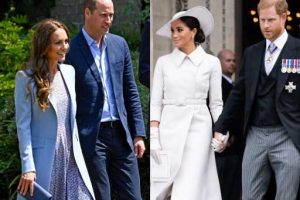 Prince Harry and Meghan Markle are traveling to the United Kingdom this fall, but not to rekindle their estranged relationship with Prince William and Kate Middleton.

A spokesperson for the Sussexes confirmed that the couple would be arriving in England on September 5 for the One Young World Summit, and would return to the UK on September 8 after a brief visit to Germany. The Duke and Duchess will reportedly stay at Frogmore Cottage on the Queen’s Windsor estate, according to The Sun. Just half a mile away is Prince William and Kate Middleton’s new home, Adelaide Cottage, and despite the close proximity, sources report that the royal siblings have no intentions of seeing one another during the Sussexes’ stay.

Although Princes William and Harry are still at odds, there’s speculation that the Duke and Duchess of Sussex will at least see the Queen, if her busy schedule permits a visit.

If you’re scratching your head at why the royal brothers are feuding, we kind of all are. While the public at large isn’t entirely sure when the rift began or what exactly the spat is about, sources speculate the fallout began at the end of 2018 when Harry allegedly told William he wasn’t doing enough to include Meghan in the family. Shortly after, a video surfaced in which it appears Meghan was trying to strike up a conversation with the future king, and he blatantly ignored her, opting to fiddle with his scarf instead. The list of transgressions against the siblings and their significant others has only grown since — Harry and Meghan leaving the royal family, the chilly treatment they describe from senior royals, that Oprah interview, etc. — resulting in an estranged relationship most doubt will ever be repaired.

Perhaps Harry and Meghan will simply be too busy with work to see William and Kate — but we sincerely hope they’ll at least make the gesture of saying hello when they’re staying so close.