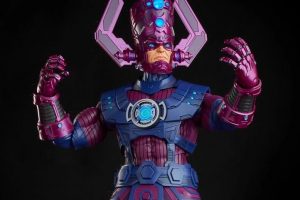 For this massive undertaking, 14,000 backers are required to send the project into production. In less than a week, the project has already well-surpassed the halfway mark of 7,000 backers with more than 40 days remaining. As a bonus, each backer will be provided with a code for 70,000 Marvel Insider points which unlock exclusive physical and digital items such as e-copies of Fantastic Four(1966) #48-50.

Priced at $399 USD, fans can now pre-order the Marvel Legends Galactus figure on the Hasbro Pulse website, with shipping expected to begin around fall 2022.

In case you missed it, Spin Master has released its first-ever League of Legends action figures.
Source: Read Full Article