Home » Entertainment » Hate, Hope and Healing at Under the Radar

Hate, Hope and Healing at Under the Radar

The New York Times theater critics Ben Brantley and Jesse Green attended the opening weekend of the Public Theater’s annual Under the Radar festival. Here’s the first of their reports on the experimental work on display. The festival runs through Jan. 13 at various venues; for more information visit publictheater.org.

If you’re creeped out by Villanelle — the angel-faced psychopath from “Killing Eve” — you may want to steer clear of the nameless woman who opens this corrosive double bill of monologues. But if you enjoy unblinking journeys into everyday hearts of darkness (and hey, I don’t judge you), then this portrait of a blank-faced young Brooklynite may be just your ticket.

She is embodied by a pale and attenuated Julia Mounsey, who with Peter Mills Weiss created this icy diptych about giving and receiving pain. Though only in her early 20s, Ms. Mounsey’s character has figured out her definitive purpose in life, and she’s totally cool with it: She exists to hurt other people.

That description has nothing to do with the rituals of consensual sadomasochism. She works by stealth, and when she accomplishes her goal, these victims are unlikely to blame her for their suffering.

Recounting such victories is almost enough to bring a smile to her face, except spontaneous smiles are not part of her physical vocabulary. She has felt detached from her body since she was a child, she says. And Ms. Mounsey’s uncannily inert presence suggests a battle between body and soul that has ended in the coiled stasis of a draw.

If you encountered this character at, say, a Williamsburg bar, you probably wouldn’t look twice at her. But as Ms. Mounsey’s restless, appraising gaze makes clear, she would clock you, for sure. (The house lights are left on during her monologue, so you are in her line of vision.)

The young woman who inhabits the evening’s second half is pretty much the opposite of the one played by Ms. Mounsey. Portrayed with relentless, nerve-shredding shrillness by Mo Fry Pasic, she wouldn’t appear to possess a shred of self-awareness as she careers through agitated phone calls with her mother and her bestie. She seems as twittery and free of thought as the parakeet seen in an onscreen video.

But as with the show’s first part, this segment gives us an almost achingly ordinary-seeming type — the narcissistic, superficial urban singleton — and strips it to its disquieting core. There is boundless pain and self-hatred at the heart of Ms. Pasic’s performance.

The title of “50/50” comes from a GIF on the internet described by Ms. Mounsey’s character. It’s a nasty, animated depiction of a woman trapped in a torture device. I wouldn’t suggest looking it up and watching it. But it speaks volumes about a culture that would produce both these deeply unsettling women. BEN BRANTLEY 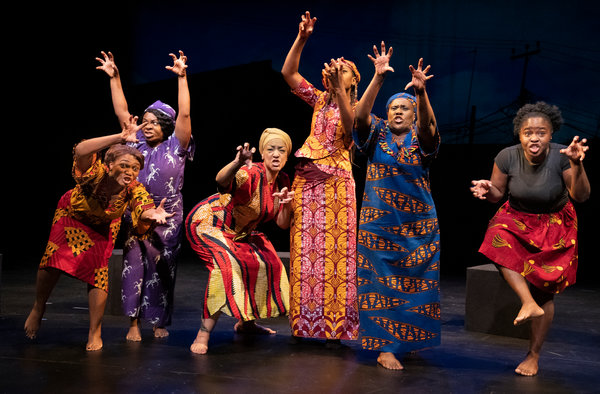 They are seen first only as shadows, 10 nearly invisible forms in the darkness. But there is light on the stage, too, in the form of the tiny electric candles that prick the enveloping blackness.

These are sparks to be fanned into flame. By the end of “Hear Word! Naija Woman Talk True,” from the Nigerian company iOpenEye Ltd., the brightness radiating from its all-female cast has the glare and heat of a raging bonfire.

Written and directed by Ifeoma Fafunwa, “Hear Word!” is agitprop theater of an exceptionally vital order. A combination of song, dance, sketches and soliloquies, this enlivening production traces the injustices under which Nigerian women live, before turning into a jubilant repudiation of misogyny.

The show begins with a reference, in projected supertitles, to the internationally infamous kidnapping of 276 schoolgirls from the village of Chibok by the Boko Haram. It then cannily segues into a satirically cadenced exchange among three women about annoyances familiar to almost any female on this planet — being catcalled, ogled and casually fondled by men.

What follows is far harsher, an artfully staggered, increasingly harrowing depiction of the institutionally sanctioned forms of humiliation and subjugation.

A 12-year-old bride, her body ravaged by the botched delivery of a stillborn child, is rejected by her husband and consigned to a life of exile in her father’s house. A wearily resigned wife is awakened by her husband to sexually service a physically repellent but locally powerful guest. A widow is forced to sit for days and nights on the grave of her husband.

Ms. Fafunwa makes it clear that men are not the only culprits. Censorious matrons are heard gossiping and lamenting about women who do not marry or produce progeny, or think too much of themselves.

But roughly midway through, the show is transformed from an animated list of grievances to a call to rebellion, filled with songs and dances of defiance.

Perhaps most satisfying are the accounts of women taking control in the marital bedroom, in a society where “his desire determines your value,” and attractiveness is believed to end at 40.

These women include Sister Esther, a born-again Christian who was brought up to believe that what exists between her legs is Satan’s playground. On her honeymoon, she discovers that, on the contrary, sex is a gift from God. And an orgasm? That’s “my vagina singing hallelujah.” BEN BRANTLEY

Under the Radar sometimes seems like the Public Theater’s post-Advent calendar, with gifts secreted in every habitable cranny. “The Cold Record,” from the Rude Mechs collective in Austin, Tex., hangs out in a classroom somewhere on what seems to be a fractional floor between floors. Aptly enough, the space is done up for the performance as a basement rec room, complete with motley chairs and a fridge full of beer.

I say aptly because “The Cold Record,” written and performed by Kirk Lynn, is aggressively informal, hiding its craft and intentions beneath the ruse of its setup. From the start, Mr. Lynn, a friendly guy in an undershirt, tells us that “not much” is going to happen. He’s there simply to make us a mixtape and then tell a 28-minute story.

To that end, Mr. Lynn begins by calling out the titles of punk rock songs that audience members have previously identified, on a website, as their favorites. One by one the nominators are asked to explain what the selected song means to them, which is usually some variation of “I liked it.” (Among the choices on Friday night were “Clampdown” by The Clash and “Rapture” by Blondie.) Mr. Lynn then plays a snippet of each and offers a bit of trivia about it.

If you are a punk rock fan, as plenty of the 20-person audience seemed to be, you may find this enthralling. I found it aimless, even though Mr. Lynn, an artistic director of Rude Mechs, promised to email everyone the resulting mixtape.

But then comes the story, which Mr. Lynn rattles off in mile-a-minute haste and a confident actor’s control of the audience. This part, too, is about punk rock, at least laterally: A 12-year-old misfit finds an outer expression of his unhappiness, and thus a small cure for it, in listening to the music. In order to do so in private and at the correct earsplitting volume, he pretends to be sick most days at school so the nurse will send him home; in this way, he has come close to beating the student record for colds — hence the title.

As directed by Alexandra Bassiakou Shaw, the story, captivating and sad and beautifully delivered, is leavened by its pacing and its charmingly low-tech special effects. (Stars on the ceiling? No problem!)

But I couldn’t help feeling, as I have with other Rude Mechs productions — including “Stop Hitting Yourself,” also by Mr. Lynn — that the deliberately anti-theatrical mode of presentation has uncoupled itself from the powerful theme the show seeks to dramatize. At some point, a work must acknowledge its own ambition, or risk leaving the audience with a cold record of its own. JESSE GREEN

END_OF_DOCUMENT_TOKEN_TO_BE_REPLACED

END_OF_DOCUMENT_TOKEN_TO_BE_REPLACED
We and our partners use cookies on this site to improve our service, perform analytics, personalize advertising, measure advertising performance, and remember website preferences.Ok