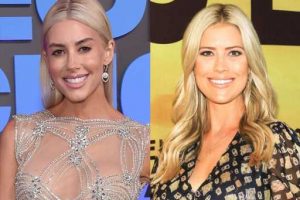 Christina Hall’s custody battle with ex-husband Ant Anstead is now shining a light on her relationship with her first ex-husband, Tarek El Moussa. They share two kids together, daughter Taylor, 11, and son Brayden, 6, so amicable co-parenting is probably tops on their list. But El Moussa’s new wife Heather Rae Young revealed that it’s not dad who does most of the communicating with Hall.

Revealing that the two households “keep it separate” when it comes to parenting, Young tells InTouch Weekly that there aren’t any group activities as a blended family. “We really focus on our house and raising the kids how we want to at our house and healthy habits here,” she explained. “And so, we just really focus on our household.” Instead of dad doing the planning with his ex-wife, it is Young who decided to take on that duty as a stepmom to the kids.

Young added that they “communicate for the children” and then clarified that it was the two women who do all of the planning. “Her and I mainly do,” she said. “And you know, obviously, we’re raising kids, and they’re half the time over there, half the time with us.” The Selling Sunset star subtly makes it sound like there is very little conversation between the two families outside of the logistics needed to make sure the children are taken care of.

That wouldn’t come as much of a surprise to Flip or Flop fans, who know that El Moussa and Hall’s friendship was complicated after their divorce. El Moussa had an on-set outburst aimed at Hall that likely led to the demise of the show, which wrapped up earlier this year. To make co-parenting matters even trickier, Anstead has struck up a close friendship with Young and El Moussa — the two ex-husbands have a strong bond. In the end, it’s about prioritizing all of the kids’ needs first and keeping the adult drama far away from them.