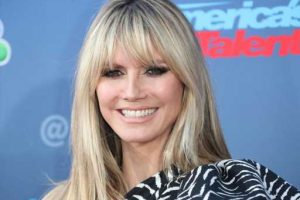 Heidi Klum is a master at teasing her audience when it comes to new projects (or her epic Halloween costumes) and she’s at it again with a short clip hinting at a project with Snoop Dogg. The supermodel did her best to entice her followers with a very sexy clip showing off just a small clue of what is to come.

She’s on the beach in tight, form-fitting lingerie with black fishnet stockings that hug every curve. We catch glimpses of Klum hidden behind black sunglasses with silver studs as her hands with long white nails feel their way up and down her fit physique. It’s one of her most sultry Instagram posts yet. And she only gave a tiny indication about what is ahead with the rapper in the caption, “You know it’s lit when it’s @snoopdogg and Heidi. 4 more sleeps…”

The America’s Got Talent judge has already shared a short musical clip that might signal a song collaboration for a commercial. Even though they seem like an unusual pair, they are both pop culture icons, so it might make for a hilarious partnership. And we know that Klum loves music, she even resurrected her 2006 “Wonderland” holiday hit this year with a new music video.

So don’t ever count the 48-year-old TV personality as “just” a model. She has quite a few hidden talents and it looks like they are getting tapped for a smokin’ hot collaboration with Snoop Dogg — the pairing that we didn’t even know we needed until 2022 rolled around.