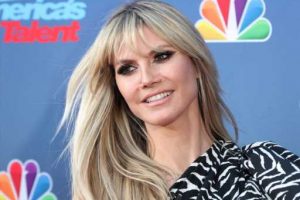 From Cindy Crawford to Vanessa Paradis, we’ve seen tons of our favorite supermodels’ kids wanting to follow in their famous mama’s footsteps. Now, Heidi Klum has revealed that her daughter Leni, whom she shares with ex Seal, may also want to make a name for herself in the modeling world. In a new episode of People, Klum told the outlet that her daughter loves being on the set of Germany’s Next Top Model, which the supermodel hosts. While the mother was previously reluctant to allow her daughter to pursue modeling opportunities in an effort to protect her privacy, Klum is now supportive of her 16-year-old daughter’s dream and believes she is old enough to begin in the industry.

“She’s old enough now,” the former Victoria’s Secret model told People. “I always thought she was too young. We always also decided to keep the children out of the public eye. But she’s driving a car now, she’s 16, so I figured if you can do that, you can also model now if this is what you wish to do.”

Though she has changed her previous position of keeping her daughter out of the limelight, Klum still has her reservations about Leni joining the tough industry she was part of. “Obviously, as a mother, [I want my] child to do what she wants to do. The industry is great and I love it and I’ve been in it for over 20 years but it’s also, it’s a lot of traveling, it’s different,” she added, “You have to be a strong person, especially as a woman you have to be very strong.”

As for Germany’s Next Top Model, Leni frequently enjoys visiting her mom’s work on set of the America’s Next Top Model spin-off. Which, according to Klum’s Instagram, the doting mama has henceforth called “Bring your Child to work day’s”. Honestly, we love to see it!

“She kind of comes [on set] and looks and learns not just what I do but also what all the different people are doing on a TV set. I think it’s very interesting to her,” Klum told People. “When you’re that age you’re still trying to figure out who you are, what you want to be and kind of see for the first time what are all these different jobs to make a TV show happen. She does want to do what I do.”

“Who knows, maybe in five years when I’m not hosting the show anymore maybe it’s going to be like Germany’s Next Top Model by Leni Klum instead of Heidi Klum. Who knows,” the model joked, “She’s kind of playing with this idea.”

We love the idea of Leni filling her mom’s shoes, and think the idea of a mother-daughter duo someday walking the catwalk together would be nothing short of iconic. Guess we’ll just have to wait and see what Leni does next!

Before you go, click here to see kids who are following in their supermodel moms’ footsteps.

END_OF_DOCUMENT_TOKEN_TO_BE_REPLACED

END_OF_DOCUMENT_TOKEN_TO_BE_REPLACED
We and our partners use cookies on this site to improve our service, perform analytics, personalize advertising, measure advertising performance, and remember website preferences.Ok