Here's an Exclusive Clip of Chris Pratt in 'The Tomorrow War' 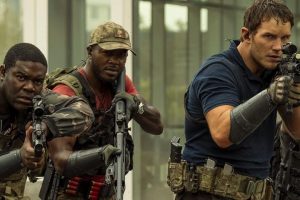 Ahead of the release of Amazon Prime Video‘s newest sci-fi film, The Tomorrow War, the streamer has released an exclusive clip introducing the star of the film, Chris Pratt.

The clip sees Pratt’s character, Dan Forester joined by Sam Richardson’s character Charlie. Audiences are given the first taste at the dynamic between the two while they both appear to stand in line, ready to be recruited for the forthcoming mission.

The film is set to follow a group of time travelers who arrive on Earth from the year 2051 to deliver an urgent message. A deadly alien species is expected to take over mankind thirty years into the future and the only hope for survival is for both citizens and soldiers to be transported into the future to fight. Dan and Charlie are amongst those recruited, teaming up with rocket scientists played by Yvonne Strahovski and his estranged father, portrayed by J.K. Simmons.

Watch the exclusive clip of Sam Richardson and Chris Pratt in The Tomorrow War above.

The Tomorrow War lands on Amazon Prime worldwide on July 2.