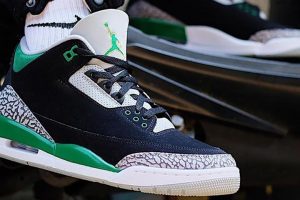 There’s still several weeks of Summer to go and an entire Fall season to go, but it’s never too early to get amped up about holiday footwear releases. And for the latter months of 2021, Jordan Brand has several striking retro releases to fire out the cannon, one being the Air Jordan 3 “Pine Green” that has just appeared by way of on-foot imagery.

This impending installment is in no way affiliated with the University of Oregon, but it’s color schemes surely elicit memories of past Duck-themed PEs that the brand has unveiled in the past. This uppers of this upcoming iteration are primarily dressed with black nubuck side panels and come couple with the models traditional grey cement patterns on the toe tips and sides of the heels. A lush “Pine Green” tone then splashes onto to collars, the forefoot eyelets, in shiny fashion on the midsoles and the Jumpman logos on the tongues, the latter of which is outlined in yellow. The heels are adorned with the traditional Jumpman logo and Air branding, both of which are dyed in a lighter gray skin.

Early reports have these slated to release on November 11 for $190 USD, but SNKRS and other retailers haven’t confirmed this yet.

Looking for more sneaker news? Release info for the Off-White™ x Nike Dunk Low “THE 50” 01 of 50 and 50 of 50 colorways has been announced.
Source: Read Full Article