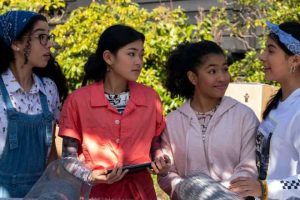 The Baby-Sitters Club returns to Netflix with season two. It’s the perfect fix of Young Adult drama to accompany the back-to-school energy that’s in the air.

The Baby-Sitters Club is back for season two. Netflix has added another season to its popular reboot of the young adult favourite. Based on the books by author Ann M. Martin and following the 1995 film, the reboot follows the friendship group of Kirsty Thomas, Claudia Kishi, Stacey McGill, Mary Anne Spier and Dawn Shaffer as they mature into adolescence.

While you may be wondering what you have in common with tweens trying to earn pocket money, this group deals with its fair share of drama. Season one saw Mary Anne mourning a mother she lost at birth, Kirsty worrying that her single mother was marrying for money, and all that happened while the girls were collectively trying to set up a profitable babysitting business.

If the universal themes aren’t enough to draw you in, then the names helming the production surely will. Rachel Shukert of GLOW returns as showrunner, and she’s joined by Broad City’s Lucia Aniello, who will once again be directing. Sold? Read on for everything you need to know about season two.

The Baby-Sitters Club returns with drama and high-jinks in October.

Is there a trailer for The Baby-Sitters Club season two?

The recently dropped teaser catches up with the group as they end summer and get into the back-to-school spirit. You can watch the trailer for Netflix’s The Baby-Sitters Club below:

What’s the plot of The Baby-Sitters Club season two?

Although Netflix is staying tight-lipped about the plot details, the trailer gives us enough of a sneak peek to know we’re in for high drama. Two new characters called Jessie Ramsey and Mallory Pike join our resident babysitters and judging from the trailer their presence isn’t too well-received. We also spy Anne Marie dating Logan, who she met at summer camp, and a rumour about Kirsty’s mum – played by Alicia Silverstone (Clueless) – possibly being pregnant.

Showrunner Rachel Shukert told Deadline that viewers can expect storylines to: “continue exploring themes that allow all young viewers to see themselves represented on screen, while also dealing obliquely with many of the things we’ve all been through in the past year: loss, change, responsibility, and trying to find joy and meaning in unexpected places.”

What is the release date of The Baby-Sitters Club season two?

You can watch The Baby-Sitters Club on Netflix from 8am on 11 October.