It hurt to stand. To climb stairs. To walk to the nearest grocery store.

Yet every Saturday, Michael Warner took a bus from Astoria in Queens to Midtown Manhattan, where he bought three dozen doughnuts from the city’s lone Krispy Kreme franchise.

He made the trips in secret for fear of how loved ones might react. Mr. Warner, 44, has been overweight all his life; he has hypogonadism and hypothyroidism. At his heaviest, he weighed 696 pounds. 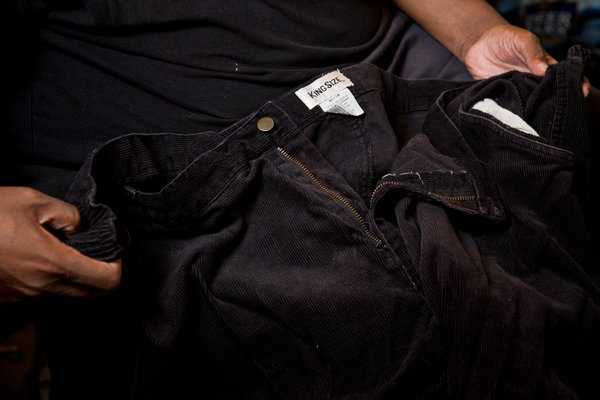 Destructive choices and habits contributed to his weight gain, he said. And the compulsion to overeat was driven in part by depression and anxiety.

When Mr. Warner learned in his late 20s that he had anxiety, and it took him by surprise. He considered himself reasonably calm and levelheaded, except, he recalled, for the one time when he became so stressed that he wrung his hands until they bled.

In 1999, Mr. Warner was laid off from his technology support job at a public relations firm. “That’s when everything really went downhill,” he said.

Throughout his ensuing job hunt, he said, his weight hurt his chances. One interviewer, seeking to fill a mail room slot, repeatedly asked Mr. Warner if he had the stamina to deliver parcels to a post office a block away. Other potential employers had similar concerns. None hired him.

“There was really no point to continue,” Mr. Warner said. He has not held down regular work in more than 18 years, since being laid off. For a man who took his first job at 14, who juggled part-time work while earning his bachelor’s degree and who valued being a contributor, unemployment was crushing.

From 2000 to 2004, he gained 200 pounds. In subsequent years, he became a recluse. He avoided riding the subway — “I really hated the stairs,” he said — for a decade. He missed milestone events, including graduations and the birth of a nephew. If Mr. Warner had errands, he would hire a taxi to shuttle him, even a couple of blocks.

His feelings of worthlessness and hopelessness snowballed.

“It’s like if you’ve been buried in an avalanche,” Mr. Warner said. “You can’t move. You can barely breathe. And you just imagine that that’s your body. And this is 24/7. No one’s coming to help you.”

In January 2012, he had a checkup with a doctor. “She said, ‘Congratulations, you’re prediabetic,’” Mr. Warner recalled.

Instead of being afraid, Mr. Warner felt motivated to make a radical change, to take responsibity. He said to himself: “No one else can do this. Only I can do this.”

Mr. Warner shed 30 pounds by giving up sugar. It wasn’t long before the foods he had loved, like Cinnabon pastries and White Castle burgers, turned his stomach. He went from drinking two six-packs of soda a day to buying bottled water by the case.

He also sought out a diabetes and weight specialist at Weill Cornell Medical College and committed to 30 days of a new diet and medication regimen. Seeing its effectiveness encouraged him to continue.

With his energy levels bolstered, Mr. Warner started walking and made a game of visiting places in is neighborhood that he had not seen in years.

Mr. Warner has lost nearly 400 pounds since 2012. Last year, he was startled when he glanced at himself in a mirror. “I thought I was deformed,” he said. “I didn’t realize I had shoulders. And a neck. I wasn’t used to seeing this.”

Mr. Warner receives $889 each month in disability payments and food stamps. He spends much of it on medical co-payments. The rent of his New York City Housing Authority apartment is $290 a month.

In April, Mr. Warner’s refrigerator broke, preventing him from preparing meals at home. It took weeks to replace it, which depleted his budget. He fell behind $803 on rent and turned to Catholic Charities Brooklyn and Queens, one of the eight organizations supported by The New York Times Neediest Cases Fund. Using $500 from the fund, the agency helped cover part of his debt.

At his worst shape, Mr. Warner could not bend down to tie his shoes. If a photo was being taken, he moved out of frame. In one mortifying instance, he could not fit into a cab.

Of late, Mr. Warner poses for pictures regularly. He eschews elevators and races up stairwells. And he spends hours trekking across Astoria, sometimes covering up to 21 miles a day, as tracked by his Fitbit.

A few times a month, he donates plasma at the New York Blood Center, which he said is his way of giving back. Friends and family are close with him again. Sticking to a diet, taking his medication and attending therapy have allowed Mr. Warner to keep a positive mind-set, he said.

“If you asked about happiness back then, I couldn’t even tell you how to spell it,” he said of his past.

His vision for the future includes re-entering the work force.