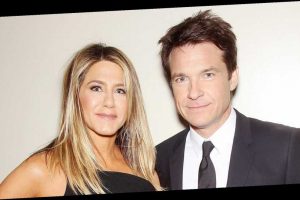 The one with the Zoom call! Jason Bateman virtually attended the 2021 Golden Globe Awards on Sunday, February 28, from his longtime friend Jennifer Aniston’s house.

The Friends alum, 52, shared three behind-the-scenes photos of the Ozark star’s computer setup for the 78th annual ceremony, where he was nominated for Best Actor in a Television Series – Drama. (Josh O’Connor ended up taking home the award for his role as Prince Charles in The Crown.)

“Bateman came over and brought the @goldenglobes with him,” Aniston captioned one snap of the actor, also 52, sitting with his daughters, Francesca, 14, and Maple, 12, whom he shares with his wife, Amanda Anka.

The Morning Show star later gave fans a better look at how Bateman looked so picture-perfect on camera, joking that it “takes a village.” She uploaded a picture of him sitting in front of a laptop propped up on a pile of books as Anka, 52, stood nearby with a drink in hand while two men set up a ring light and a reflector.

Aniston and the Arrested Development alum have run in the same circle for years in addition to costarring in movies such as The Break-Up, The Switch, Horrible Bosses and Office Christmas Party.

Bateman praised the actress for setting “such a great example” during a joint interview with Variety in August 2020, saying, “It’s a very complicated, full life that she manages, and she does it with grace and kindness and warmth to her closest friends and to a person she might meet that day on the set. I have learned, and it has been reaffirmed to me, that no matter how successful you become, that is still the most important thing for your own peace of mind, but also for the work environment because a lot of people take their cues from what No. 1 on the call sheet is doing and how they’re handling things — how they’re holding themselves, how they’re behaving.”

Aniston repaid the compliment by telling the magazine that “there is no one more professional and lovely to be around” than the Outsider alum.

“There’s no histrionics with him,” she added. “He is prepared, he is solid, he is kind, he is funny. I love my days when I get to be with Jason on a set or my house on a Sunday. He’s one of the greatest people to be around, whether I get to work with him, which I don’t get to do enough of and it’s been too long.”

Bateman and his wife also developed a close bond with the Murder Mystery star’s ex-husband Justin Theroux. Us Weekly exclusively reported in February 2018 that Anka “convinced” the Leftovers alum, 49, to join her, Bateman and Aniston on a trip to Cabo San Lucas, Mexico, the month prior as a last-ditch effort to “save their marriage.” However, the former couple ultimately decided to split. They have remained friends ever since.

“It was kind of the most gentle separation in that there was no animosity,” Theroux told The New York Times in September 2018, noting that they “respected each other enough that it was as painless as it could be.”

Scroll down to see more photos from Bateman’s Globes night at Aniston’s house!