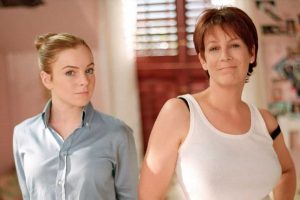 Like the crypt keeper! Fans are freaking out after noticing the much-older stunt double who was used for Harry in the 2003 film Freaky Friday.

Melissa McCarthy, Octavia Spencer and More Stars Who Do Their Own Stunts

“So I’m sitting here watching Freaky Friday. Tell me why I’m barely noticing the stunt double,” TikTok user @thegabbienicole said in a voiceover on the clip. “WHO?”

When Pei-Pei (Rosalind Chao) notices her mother meddling in the Coleman family’s business once again, she jumps in to stop the grandfather-grandson duo from eating their cookies.

However, the eagle-eyed fan noticed that young Harry was replaced by an obviously older actor before being knocked to the ground.

‘Cruella’ and ‘Black Widow’ Are All That! 17 Must-See Movies This Summer

“Little did we know he too had switched bodies with a middle-aged person. But only for .0007 seconds,” one TikTok user commented. “From Harry to Harold,” another added.

Some commenters were quick to identify the stunt double as Larry Nicholas, whose long list of roles also includes a sub for Macaulay Culkin’s Kevin McCallister in 1990’s Home Alone.

Though Freaky Friday came out almost two decades ago, it demands a rewatch every once in a while. Many TikTok users recalled their own experiences catching the stunt double scene while watching the movie, noting how the moment played a hilarious role in their childhoods.

“My sister and I paused right here once in like 2006 and still laugh at it to this day,” one fan wrote on the app.

Over the years, the cast has shared memories of the cult classic as well.

Lindsay Lohan Through the Years

Chad Michael Murray, who played heartthrob Jake in the film, once revealed that he made out with Curtis, 62, while filming.

“I was Lindsay Lohan’s first kiss. Jamie Lee Curtis was there and was trying to settle the situation because Lindsay was nervous,” the One Tree Hill alum, 39, said during an April 2019 appearance on Busy Tonight. “So, we go and sit in Jamie’s trailer and she’s talking to Lindsay like, ‘Just kiss him’ … and she grabs me by the back of the head and makes out with me. … At this point I went, ‘Dude, I just made out with Jamie Lee Curtis.’”